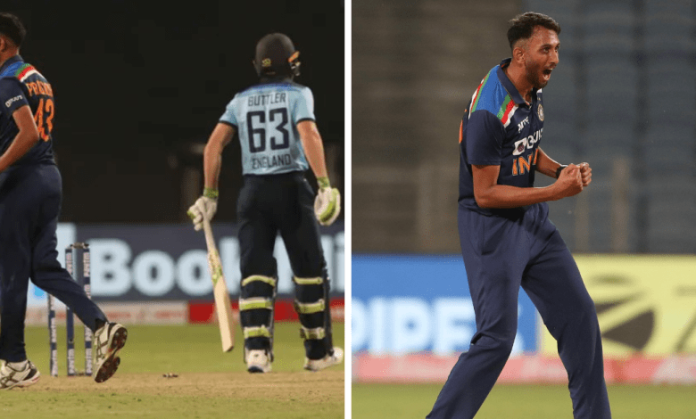 Prasidh Krishna bowled a toe crushing yorker to castle Jos Buttler’s off stump, which left him in shock.

Prasidh Krishna has yet again shown his class with the ball by dismissing Jos Buttler. He clean bowled Buttler with a peach of a yorker during the second ODI between India and England at the Maharashtra Cricket Association Stadium in Pune. While chasing a daunting total of 337 runs, England openers Jason Roy and Jonny Bairstow gave them a flying start yet again. 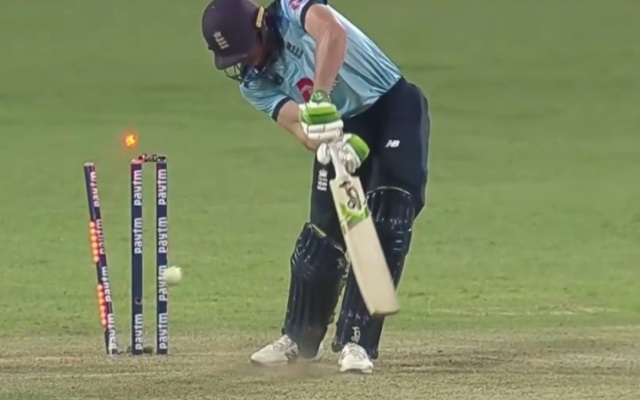 Prasidh bowled two dot balls and then bowled an off-stump yorker with sheer pace. Buttler could not bring his bat down on time and the ball sneaked below his bat and castled the stumps. That was a gem of a delivery from Krishna to which Buttler had no answer.

Watch the video of the delivery that made everyone admire this new talent in the Indian team:

How the match turned out eventually for the two sides?

Coming to the game, India scored 336 runs for the loss of six wickets in their 50 overs. KL Rahul scored a century ( 109 runs off 114 balls) band Rishabh Pant ( 77 off 40) and Virat Kohli (66 off 79) scored half-centuries each. Chasing the total, England secured a comfortable win against the hosts.

Jonny Bairstow was the highest run-scorer of the innings scoring 124 runs off 112 balls. His opening partner Jason Roy scored 55 runs off 52 balls. Ben Stokes came in and scored 99 runs off 52 balls. When they lost three wickets in close succession, Dawid Malan and Liam Livingstone guided them to a six wickets victory with 6.3 overs to spare. The series is now nicely poised at 1-1, with the series decider at the same venue on March 28.

This will be quite a crucial game. The likes of Prasidh Krishna and co. will want to make an impact yet again. The games so far have been high scoring and the two teams are looking good. Only time will now tell which of these two teams come out on top. Both are doing great in terms of overall play and this quite a contest so far.

Virender Sehwag Claims Some Players Of The Chennai Super Kings Are...