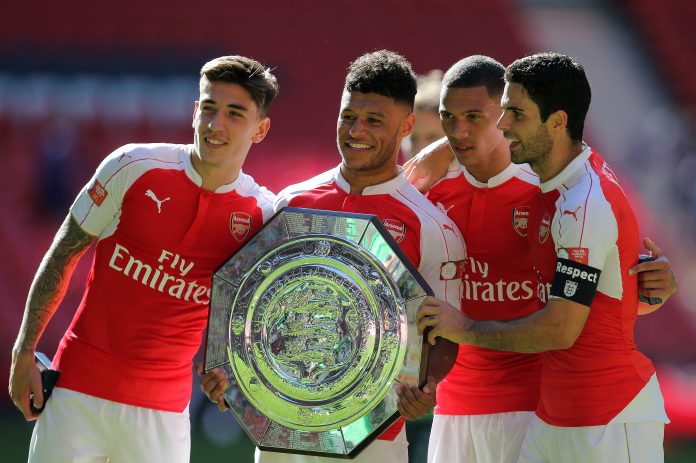 Arsenal face off against Merseyside outfit Liverpool in their opening fixture of the 2016-17 Premier League season at the Emirates on Sunday. Both clubs will want to
take back all three points at the start of the campaign, with the tie expected to be a high intensity battle. The two English giants will want to make use of their
new additions and see how things work in the first game of the new season, as they will hope to win some major titles in the upcoming campaign. Arsene Wenger in
particual will want to have a positive start, as all the pressure will be on his team to deliver once again, after finishing in second place in the
points table in the previous term.

The French boss also has some issues within his squad at the moment with injuries to some of his key stars and lack of match fitness being a problem as well.

Keeping that in mind, he will have to choose a starting eleven that will be able to face up to the challenge put to them by Jurgen Klopp’s side.

Defence:
Petr Cech has been solid at goal, since his arrival from Chelsea last summer and will once again be the first choice keeper for Wenger in the upcoming campaign. The
former Czech Republic international is an experienced veteran and his presence at the back has made a huge difference to the confidence of the Gunners’defensive line.
Hopefully he can deliver once again in the upcoming campaign. In front of goal, will be the four man defence, though Laurent Koscielny, Per Mertesacker and Gabriel
Paulista will all be missing from the starting eleven. The French manager will have to resort to using youngsters Calum Chambers and Rob Holding together at the heart of
his defence, unless he signs an additional star in the upcoming days, with Shkodran Mustafi being linked with a move to the Emirates. Apart from that, Nacho Monreal
will start on the left, along with Hector Bellerin on the right.

Midfield:
The midfield will feature the holding midfield pairing of Granit Xhaka and Santi Cazorla. The Swiss and Spanish pairing will have a mixture of experience and youth,
with Wenger hoping that they can strike balance and bring stability to his side. In front of them will feature the trio of Alexis Sanchez, Mesut Ozil and Aaron Ramsey,
from left to right. The three big guns of Arsenal will be expected to create chances for the striker up front and the home team will want to take an early lead, if
their attacking midfield players can deliver.

Attack:
Theo Walcott might be the player to start as the lone striker, with Olivier Giroud nowhere to be seen so far. The attacker was not part of the pre-season games, though
he looked really good in the Euro 2016 tournament in his native country of France. Chuba Akpom might be another option to play up front and is prolific form, though
he will surely start on the bench.

Arsenal Already Set Their Sights On Aaron Ramsey’s Replacement, Is He...