The Gunners have cemented their place in this season’s Europa League semi-finals after a commanding 4-0 away victory over Czech side Sparta Praha in the second leg. Both of these teams played this game on the back of league victories. It was Arsenal beating Sheffield United 3-0 in the Premier League and Slavia Prague winning 2-0 against Sparta Prague in the Czech First League.

Slavia Praha is the leaders of the Czech First League currently with Mikel Arteta’s side are struggling in the mid-table position in the English Premier League. It was finally a performance that Arsenal fans have been waiting for as they can now be hopeful of winning silverware at the end of the season. A brace from Alexander Lacazette and goals from Nicholas Pepe and Bukayo Saka was enough to earn a convincing victory.

1. Smith Rowe And Bukayo Saka Impress In The Europa League:

The Arsenal academy graduate, Emile Smith Rowe impressed in the absence of Gabriel Martinelli. This was after getting a start in the first eleven last night. The 20-year old’s goal got disallowed for offside by the slightest of margins but that started the momentum in favour of Arsenal. Two minutes later the youngster provided an assist for Pepe’s opening goal.

On the other hand, Saka netted his fourth goal in the Europa League this season. Mikel Arteta is very happy for the youngster claiming it is a joy to watch both Emile and Saka play.

Arteta Said After The Game To CBS In His Post-Match Press Conference- “The moment Emile scored the goal and it was disallowed the team straight away reacted. They wanted more. Again we were really efficient in our high press we wanted more. We put them under more pressure and then when we had to make decisions in the final third we were really clinical.”

“For me, it is a joy to watch them play, to watch them every day in training, how they behave, the passion and commitment that they have for the club and how much they like football. You have to let them express themselves. You have to give them a certain framework and some ideas of how they can exploit their qualities. Then it is up to them. I thought that both of them were really, really good.”

2. Lacazette’s Brace Is A Big Boost In The Absence Of Aubameyang:

The French international striker scored another brace in Arsenal’s 4-0 rout over Sparta Praha. It was one of his best performances this season for the Gunners. He scored twice in Arsenal’s last game in their 3-0 win at Sheffield United on Sunday in the Premier League. The last time he scored two or more in consecutive games was at the end of his time at Lyon in 2017. 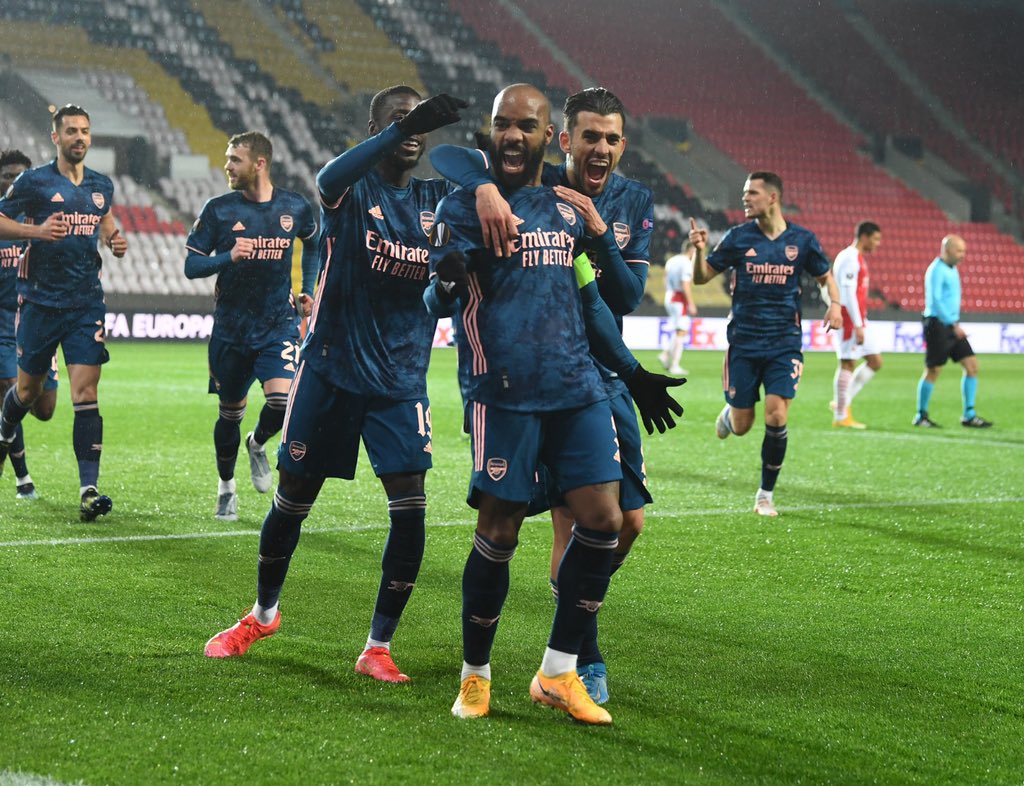 This 4-0 victory means Arsenal have now scored at least three goals in four consecutive away games. That is in all competitions for the first time since December 1932 (a run of five). Arsenal netted thrice in their away matches against Olympiacos, West Ham and Sheffield United.

Match-Preview: Will Arsenal Be Able To Shoot The Blue Birds Or...