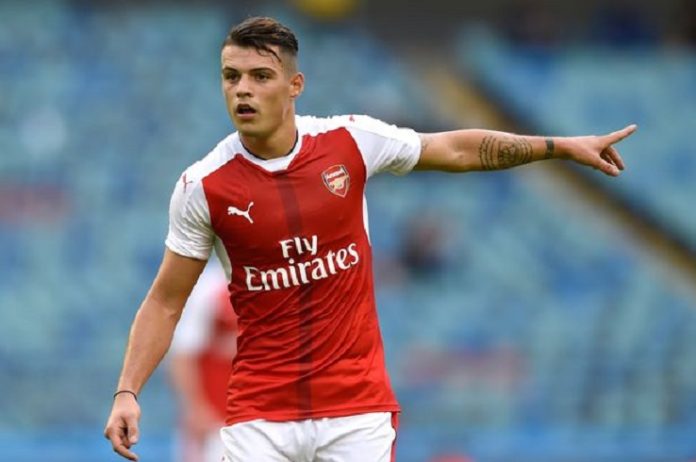 Granit Xhaka has seen his ups and downs at Arsenal FC. From being bought from Borussia Monchengladbach instead of N’Golo Kante by former boss Arsene Wenger to becoming the captain of the team. Further, the Swiss skipper also had his worst moment with the armband, when he threw it down and asked the fans to “F***off”. Things have not been great for the midfield star.

Despite that, the player was one of the best in midfield for the Gunners last season. Mikel Arteta has often come out and said that he is an integral part of the team. The fans may not have forgiven him but his performances have surely improved. He did really well in the Euros for Switzerland too.

The Arsenal star was awarded the Man Of The Match award for his team’s win against France. That was the game that turned heads as the Swiss side knocked the World Cup holders out of the European competition.

There has been a lot of unhappiness and unrest about the fact that Granit Xhaka is signing a new deal with Arsenal. A lot of Gooners have not been pleased watching him stay. They were keen on forcing him out and getting someone better. It was being said that a move to AS Roma was on the cards. However, with the club failing to pay the asking price set by Arsenal, the deal didn’t go through.

With that being said, a fan on Twitter shared a compilation of some of his worst moments at the club. It highlighted that Granit Xhaka is a major problem in the midfield. It also emphasized the point that Arsenal needs to sell him.

Should Arsenal Still Consider Selling Him Despite The Extension That He Is Signing?

It is a well-known fact that Arsenal has never finished in the top four since Xhaka has been at the Emirates. This was highlighted by a lot of fans who want him gone. Though he has played his part in making things better at times, the inconsistency has hurt the team as well. The lack of ambition is to be seen by the fact that the owners and management have not been able to replace him in the years that have gone by.

There are so many problems at Arsenal that the Xhaka issue keeps getting neglected. Ironically, he is a totally different player for Switzerland and an inspiration. Fans also feel that it could be just the pace of the Premier League that doesn’t suit him. In either case, a majority of the fans want an upgrade and fast.

The north London club has once again failed to please the fans in the transfer window. The signings have been scarce and they have not really backed Mikel Arteta. The Spaniard was confident that there would be an overhaul and that things would be better this time. The failure to see that happen has disappointed a lot of Arsenal fans, who are just displeased and angry at this point. Can we see a change at the club finally? Let’s hope so!!

Latest Transfer Update On The Future Of This Star Striker Wanted...