The latest addition to Frank Lampard’s winter list is Real Madrid’s playmaker Isco. Real Madrid has reportedly started considering various deals for midfielder Isco. Chelsea’s offer of £52m is the latest amongst all offers. Frank Lampard has maintained a constant reputation of a manager who understands young talent and invests heavily in the youngsters. Will Chelsea sign such an ageing player?

After the transfer ban was lifted, the Chelsea boss formulated a list of players to strengthen the squad and cover for the loss of star forward Eden Hazard to Real Madrid last summer. However, Lampard seems enticed when Santiago Bernabeu decided to let go of the Spanish star Isco. Frank believes Isco will bring experience to the young lineup and will tremendously boost Chelsea’s injury-marred squad.

Francisco Román Alarcón Suárez commonly known as Isco has been an integral part of the Real Madrid squad, especially in their recent ties. Headlines suggested that the Spanish player was getting sidelined and rusty in the previous months but with manager Zinedine Zidane’s belief in his abilities, Isco has bounced back and been effective off lately. However, the player feels that his time at the Bernabeu is more or less up now.

He has been a regular face in the starting eleven and has performed well under pressure. Real Madrid’s El Classico draw against arch-rivals Barcelona that ended in a deadlock saw this 27-year-old playmaker create enough opportunities to deserving a much better treatment. He was phenomenal in the Champions League draw versus French outfit Paris Saint Germain. In such a situation Florentino Perez will be very sceptical in parting from the star player.

On the other hand, a £52m deal is a big amount for Chelsea who is targeting other English Premier League also. But for Isco every penny is worth the cost. The question is with Mount already exceeding all expectations, will the Real Madrid player’s addition suppress the youngster’s opportunities. Is Lampard willing to take this risk for a quality midfielder? 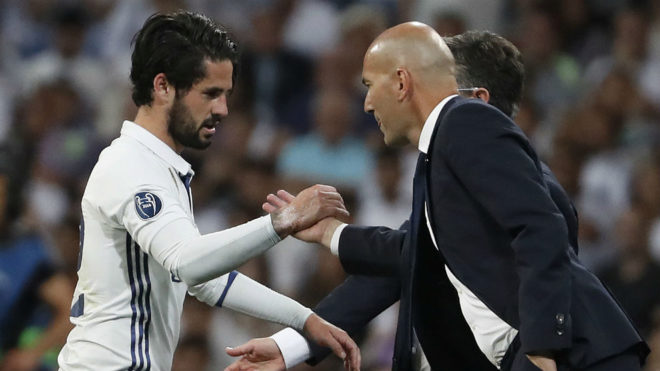 Last year during the same time, there were rumours that projected Isco’s farewell with the Las Blancos but the Spaniard decided to stay and fight. He downplayed the rumours by saying, “I am not going to go in the winter market, I am very happy. Of course, I want to continue with Madrid, to continue winning titles.”

Real Madrid’s then-manager Santiago Solari hardly started with the 27-year-old and brought him off the bench whenever needed. Despite that being the case back then, Zidane has worked hard with Isco to bring him back in the circuit. With that being said, things have not looked all that great yet.

Arsenal, Manchester City, Manchester United and Juventus have also been linked with Isco but nothing official has come out yet. Chelsea will surely pursue the negotiations even with the least probability, as they look to fortify their squad. The aim is to win titles in the long-run and the Blues will be keen to add reinforcements in the upcoming days. It will now be interesting to see how things progress in the days to come and will Chelsea sign him or not? Only time will tell.