Current Juventus goalkeeper Wojciech Szczesny has stunningly made claims about his former Arsenal teammates Robin Van Persie and Samir Nasri. The ex-Arsenal goalkeeper has slammed his former teammates and called Van Persie ‘arrogant’ while he believed that Nasri used to behave like a gangster.

Szczesny began his senior career at Arsenal back in 2009 but he was immediately loaned out to Brentford. However, during his entire Arsenal career, Szczesny made 132 League appearances for the Gunners but he also spent two seasons on loan at the Italian capital AS Roma from 2015 – 2017.

Szczesny left Arsenal back in 2017 to join Serie A champions Juventus and he has now become their number one choice keeper between the sticks. However, Szczesny has now opened up on his days as an Arsenal player and hit out at some of his former teammates.

The 28-year-old goalkeeper spoke out on Dutch superstar Robin Van Persie who is currently playing in the Eredivisie with Feyenoord. The ex-Arsenal striker led the attack for the club for eight years from 2004 – 2012 and only had one FA Cup on his resume as a Gunner. Despite scoring 132 goals for Arsenal and being considered one of the greatest strikers to grace the Premier League he never really managed to win a major honor. The centre-froward then decided to play football elsewhere as he became frustrated with the lack of trophies at North London. Having seen his old teammates leave Arsenal and win major trophies elsewhere, Van Persie decided to join fierce rivals Manchester United. The Red Devils snapped him up and he helped them win the Premier League title in his first season as a United player much to the agony of the Arsenal faithful.

Sir Alex Ferguson retired as United manager after Van Persie played a major part in landing the club their 20th League title but his top-class career also seemed to end with that honor. Van Persie struggled to achieve the same feat under the following United managers David Moyes and Louis Van Gaal and he left Old Trafford for Turkish club Fenerbache four seasons ago. 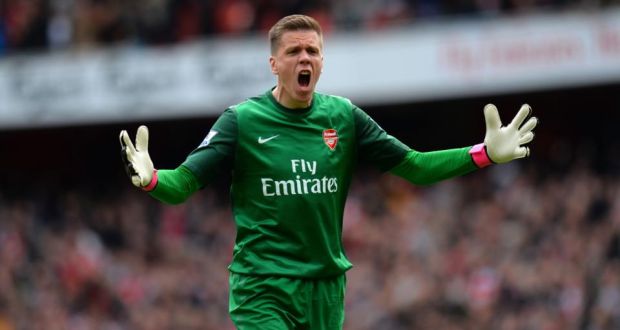 Now, Szczesny has revealed that Van Persie’s time at Arsenal could have been extended but he was extremely arrogant and paid the price for it, “You have to admit, he left for Manchester United and the next year he won the title. But the year after that he got benched, moved to Turkey and his big career ended. He could have made other decisions and achieved lots more at Arsenal. He’s extremely arrogant – sometimes.”

Another player who received criticism from the Polish goalkeeper was French midfielder Samir Nasri, who is currently playing his football at West Ham United, “He always thought he was some kind of gangster. Everyone has this guy at school, who had strong and big friends and it made him think he’s cool,”

Arsenal is currently in fourth place in the Premier League points’ table and is in the hunt for a Champions League berth at the end of the season. They have looked confident under Unai Emery in recent times and it will be interesting to see how they perform now in the business end of the season.

Their two main targets from now until the end of the season will be to with the Europa League title and to secure that Champions League spot. Hopefully, the Spanish manager can guide them and help them achieve both. He is the most successful manager in the history of the Europa League and it will be interesting to see, if he can win the same with the north London giants this term.

If that happens, the fans will have his back for sure and he can easily secure his job at the Emirates for the long-run.