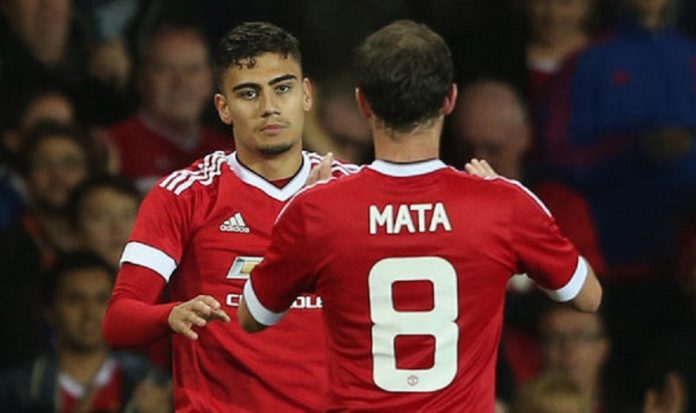 Manchester United midfielder Andreas Pereira has completed a move to La Liga side Granada on a season long loan deal. Pereira is now going to spend the rest of the season in Spain under the guidance of Granada manager Paco Jemez. Granada only managed to stay above the relegation zone last season and will now be hoping that the signing of Andreas Pereira and Sergi Samper from FC Barcelona will give the entire club a much needed boost going into the new season with high hopes.

The Brazilian’s future at Old Trafford had come under intense scrutiny for some time after he was not named in Jose Mourinho’s squad for the new season.

The 21-year-old now becomes the fifth United player to leave the squad in recent weeks on a loan basis after Cameron Borthwick-Jackson, Guillermo Varela, Adnan Januzaj and James Wilson all left Old Trafford in pursue of regular first team football.

Whilst Pereira may not be part of Mourinho’s plans for the current campaign, the fact the Portuguese was only willing to loan the midfielder out proves that the new United boss still feels Pereira has a long term future at the club.

Mourinho is fully aware that the Brazilian’s game time this season is going to be limited as there his surplus to requirements at Old Trafford despite of Performing well for under-21’s. With the so many options of quality to play forward for Mourinho, The chances of Pereira getting in the side would have been near to impossible and a loan move away from thr club at this moment is probably the best move for both parties.

Having played wonderfully for Warren Joyce’s Under-21 in the last season, Pereira is a player who needs regular first team football. His eye catching performances at under-21 level has made it clear that Pereira has outgrown that level of football and needs a chance to play on a bigger stage just like his fellow teammate Marcos Rashford.

For a player like Pereira to be sitting on a substitute’s bench week in week out is not only a shame for Manchester United but for football in general and in moving to Granada this may prove to be a significant moment in Pereira’s footballing career.

Pereira will now finally get the chance to showcase his footballing abilities in one of the world’s finest leagues in La Liga. Pereira is undoubtedly a talented player but he has yet to prove his mettle on the big stage to show the world what he is all about. Now he has got the chance to shine and it’s down to him to take that chance.