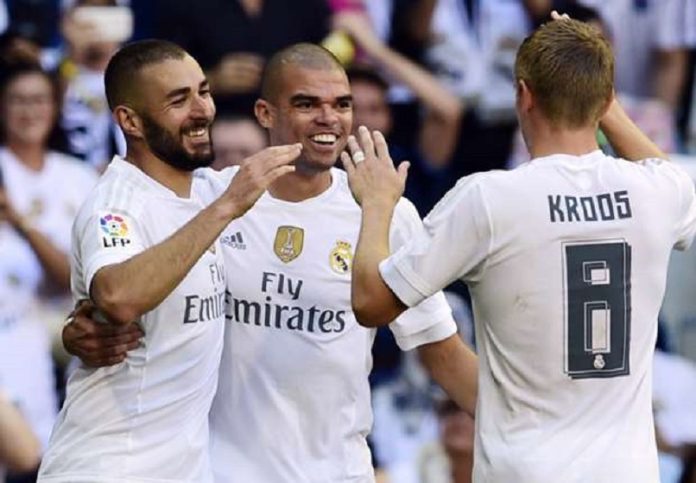 Real Madrid centre-back Pepe could be available for a move to the Premier League club in the upcoming days, as per certain recent claims. The 33 year old superstar has had a disagreement over contract issues with his current club that could cause stumbles over the defender’s future. Pepe is in the final year of his Real Madrid contract which expires in June and is yet to be offered a renewal contract by the Spanish giants. Pepe seems eager to sign a new two year deal at the club while the Los Blancos are offering the Portuguese only a one year which could tie him down only till 12 months in the next season.

It is reported the two parties are unable to agree on how long a new contract for the Portugal international should be. Also, the Premier League clubs have been looking to gain from the misunderstandings at the Bernabeau.

If Pepe fails to sign a new contract by the 1st of January, he would be allowed to speak to clubs outside of Spain and with the high wages the Premier League and the Chinese league would offer, it would be difficult for the long time Madrid star to remain at the capital. An inside source on Pepe revealed, “What he could earn in two years [if he left], they couldn’t pay him here in four,” the source revealed. Some of [the offers] are hard to turn down.”

Since joining Real Madrid from Porto in 2007, Pepe has made 327 appearances for Real Madrid scoring on 14 occasions. Pepe has helped his side win two Champions League’s and two La Liga’s including the 2016 Euro with his national team, Portugal.

Pepe has faced competition from Varane and Nacho over the few seasons with Sergio Ramos the main-stay at the back in Real’s first team. Pepe started Real’s last game which Zidane’s men won 3-2 on Saturday and helped reach a record 35 game unbeaten run.

Chelsea Boss Maurizio Sarri Makes This Strange Comment, How Will The...