The BBL Video That Went Viral- A similar debate has taken over the internet at it happened in 2010 when Sri Lanka’s Randiv bowled a no-ball, denying Virender Sehwag a century, this time the names are James Vince and Andrew Tye. During the Perth Scorchers versus Sydney Sixers game on Saturday – with a place in the finals up for contention– Andrew Tye bowled a wide ball and denied James Vince a century.

The Englishman was left with a 53 ball 98 against his name. It was the 17th over and with five runs to win, James Vince – who was batting on 98 – must’ve seen the three-figure mark as a cakewalk.

However, his partner Daniel Hughes hit a boundary, simplifying the equation to one run required to win. Hughes did play three dot balls off Jhye Richardson to offer Vince a chance to get to a century. The next over Andrew Tye had the ball and the crowd was cheering all around for Vince knew a boundary would’ve got him past 100.

The Perry Scorchers bowler came in and delivered a half-tracker which went over the batsman’s head only to be given a wide. Tye apologized immediately, but looking at Vince’s reaction, the team sensed he hadn’t bought it.

The @sixersBBL win in the WORST FASHION POSSIBLE ? #BBL10 pic.twitter.com/5uiupeUryf

One recollected the time Randiv had done this to Sehwag. It reminds me of a match between SL & Ind where Randiv delivered a no-ball against Sehwag for denied a century..
Same did Tye today, such a shameful act! ��

However, some of them spoke about Vince taking an unnecessary run and not retaining strike. One user described the opener&#39;s innings as a perfect template for T20.

“Let’s hope Liam Livingstone was taking note! Vince batted through the overs, scored quickly but not recklessly, rotated the strike as often as possible and put the bad ball to the boundary – perfect template for a T20 inning.” 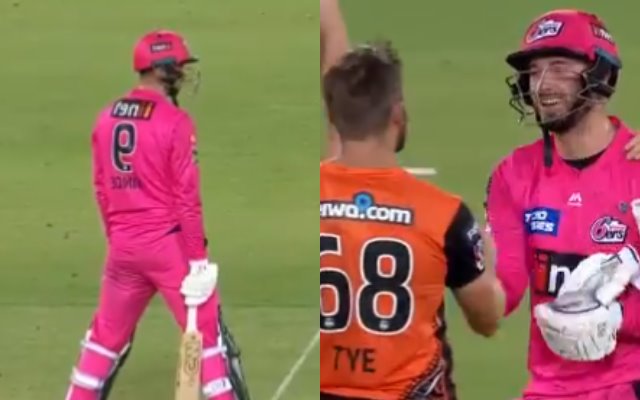 What Skipper Ashton Turner Said After The Game About The Incident?

After the match Perth Scorchers captain Ashton Turner insisted it had been an accident. He came out and said that this type of does happen sometimes in the BBL. He stated, “I assure you AJ [Tye] plays the game in the right spirit and it was unintentional”

Vince also admitted that he could have left himself a better chance of the hundred if he had not taken a single off Richardson.

“It would have been nice to get a hundred, it was only really when Hughesy blocked out a
couple that I started thinking about it. In hindsight, I took one off Richo [Richardson] to
cover which I probably shouldn’t have taken. Just focused on getting the job done, would have been a bit of icing on the cake but in the end just happy to be there at the end and get the guys home.”