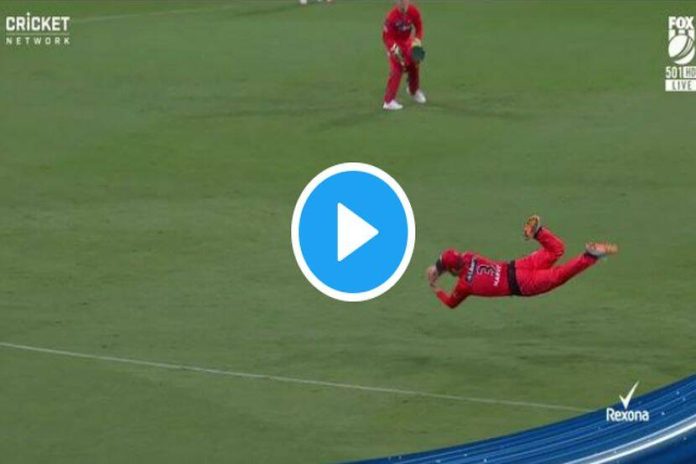 Big Bash League 2020 has made the headlines for all the correct reasons. From explosive innings, out-of-the-ground shots, and unimaginable catches, the League has shown us all sorts of spectacles this season. This time, it was 20-year-old Australian lad Mackenzie Harvey who did wonders through his fielding. The youngster took a catch in the BBL which is now being termed the catch of the decade by many.

The incident that has made the 20-year old the talk of the town, traces down to yesterday’s face-off between Melbourne Renegades and Sydney Thunders. Playing for Renegades, Mackenzie Harvey did the unthinkable. When an in-form Alex Hales was batting for Thunders at 45, he played a well-struck against bowler Mitchell Perry. There was no fault in the shot. But Harvey turned into superman! Out of nowhere, he jumped into the air, hardly getting any time to react, and caught the ball securely mid-air.

Mackenzie Harvey is an Australian cricketer. In January 2018, he was drafted in by the Melbourne Renegades as a replacement player for Aaron Finch for the 2017-18 Big Bash League season but did not play. He made his List A debut for Victoria in the 2018–19 JLT One-Day Cup on 26 September 2018. What Alex Hales Said About The Catch?

On being asked about his dismissal, Alex Hales had no words except to praise Mackenzie Harvey. He said it was outrageous. I couldn’t have hit it any better. And it was just that- Outrageous!”

Cricket Australia posted a video of the same in their social media handles with the caption “The catch of the tournament!? The best fielder in the world!? What a grab….”

The video got viral in no time and is still getting thousands of likes and retweets every hour.

Watch The Video Of The Brilliant Catch By Mackenzie Harvey Below:

Apparently, there was much more build-up to Alex Hales’ wicket than just the catch. In the stump mic, a conversation between Melbourne Renegades captain Aaron Finch and bowler Mitchell Perry has been caught. In that video, Finch is advising what approach to apply against Hales. And as it is now evident, it worked magic. In the video, Finch has been heard telling Perry, “I would rather go for 20 and try to get him out.”

Thus, the captain is asking his bowler to get the wicket at any cost. He gave Perry an open hand that the economy doesn’t matter but the wicket does. And the young bowler kept his word.

However, this is not the first time that young Mackenzie Harvey has taken such a wonderful catch. Pretty recently, Melbourne Renegades started a. ‘how to field’ show on their Twitter handles. Over there, Harvey plays the central role as he’s such a good fielder. It is in that show that Finch had earlier Praises Harvey’s fielding.