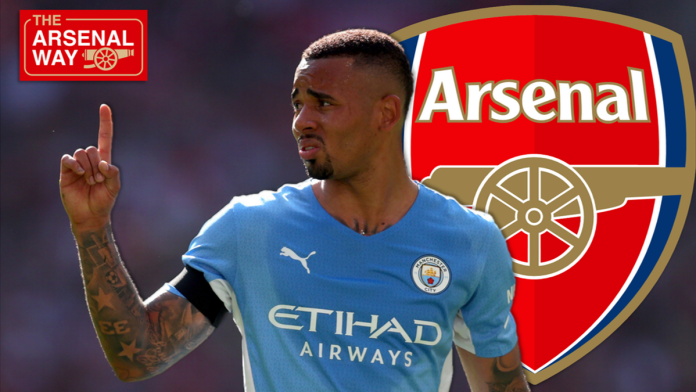 Latest Arsenal News: Arsenal is interested in acquiring Gabriel Jesus. He is valued at £40m by Manchester City. The attacker has been linked with a move to Arsenal in the past. The 25-year-old has been in sensational form for Pep Guardiola’s side. He has scored seven goals in his last five appearances despite operating as a centre-forward.

However, The Daily Mail suggests that Manchester City is likely to sign Borussia Dortmund superstar Erling Haaland in the summer. Jesus will find it much more difficult to obtain chances at the Etihad Stadium.

He has appeared in 37 games for the Brazilian national team this season. He is the only recognized centre-forward at the Etihad. However, he has only started slightly more than half of City’s Premier League games.

Jesus to Manchester City is happening as per the latest media reports?

According to reports in The Mirror and Football.London, City is prepared to trade Jesus to finance the Haaland acquisition. Arsenal has identified him as their top summer transfer target.

Arteta had worked with Gabriel Jesus during his stint as Pep Guardiola’s assistant manager. Arsenal manager Mikel Arteta is a major fan of the striker.

What can be the potential barrier to this move going through with the media outlets talking about the deal?

One potential stumbling barrier, though, maybe Jesus’ ambition to compete in the Champions League next season. This is something Arsenal is still far from achieving. With four games left to play in the season, Arsenal is now in fourth place. They are only two points ahead of their arch-rivals, Tottenham Hotspur.

Their current centre-forwards, Eddie Nketiah and Alexandre Lacazette are both out of contract in June. So, Arsenal is anxious to add a striker to their squad this summer to keep their season on track.

After leaving Palmeiras in January 2017, many thought Jesus would become the natural successor to City’s iconic striker Sergio Aguero.

He has scored 95 goals in 232 appearances for the club. The attacker has never been able to hold down a regular first-team spot throughout his career in England’s premier league. During his team’s 5-1 win against Watford, Jesus scored four goals to start his latest scoring spree.

Kevin De Bruyne, Jesus’ teammate, waived his penalty duty to let Jesus complete his hat-trick on the day. According to The Metro, the midfielder spoke about their friendship and connection with the other player, saying:

“He has been nothing short of incredible. Since he arrived in our country, I’ve developed a positive friendship with him. I believe we have crossed paths several times. He plays with so much intensity. Always there for the team. He goes above and beyond to assist them.

I have never had any qualms about his ability. Even if he is still so young. I hope he will be able to play with me regularly because I believe he will make our squad better.”

Will Gabriel Jesus move to Arsenal? Only, time will tell.