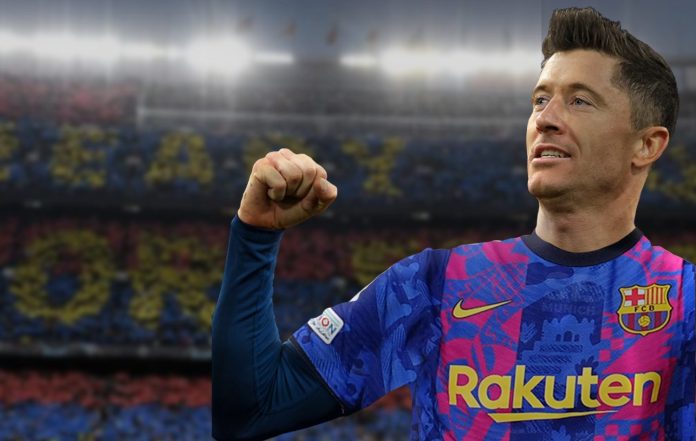 Latest Barcelona News: Robert Lewandowski, the striker for Bayern Munich who has been linked with a move to Barcelona, has issued an update about his future plans. The Polish assassin communicated his intention to depart from the Bavarians over the summer.

He is under contract with the German champions until 2023. But, he is interested in exploring other opportunities. The Blaugrana has an interest in signing the great player. The 33-year-old player has lately provided some insight into his plans for the future. This may be seen as a sign that he will be moving to La Liga soon.

While in Monaco, he gave an interview to Sky Sports and remarked (through Florian Plettenberg):

“The moment for providing information will soon arrive. It won’t be long before we can elaborate more.”

According to renowned transfer specialist Fabrizio Romano, Barcelona is supposedly in discussions with Lewandowski’s agent, Pini Zahavi. A three-year agreement is in place. This might indicate that negotiations are now taking place.

They are, however, awaiting a response from Bayern Munich at this time. The Bavarians have set their asking price for the striker at about €50 million. Barcelona has only made an offer of approximately €40 million.

According to Mundo Deportivo, a Spanish news site, Lewandowski is optimistic about his impending transfer to Barcelona. According to Fabrizio Romano, Sadio Mane is very close to signing with Bayern. But the sum that Barcelona would have to pay for Lewandowski’s move is becoming a barrier right now.

The Bundesliga giants have already been rejected by the player for a new contract. He may have already played his last game for the club.

After moving to Bayern Munich from Borussia Dortmund on a free transfer in 2014, Lewandowski quickly rose through the ranks to become one of the most accomplished attackers in the world. His track record with the Bavarian team is nothing short of remarkable. In 374 matches, he has scored 344 goals and contributed another 72 assists. Thus, he won 19 championships overall, including eight Bundesliga championships and one Champions League.

Does the purchase of the Bayern Munich star by Barcelona represent a mistake for the club?

It is every team’s dream to have a striker of Lewandowski’s calibre. But there is a possibility that Barcelona may regret its decision to sign him.

To begin with, the Blaugrana has a wide variety of options in attack. One of these possibilities is Pierre-Emerick Aubameyang. He made an immediate impact after joining the club in January after formerly playing for Arsenal. Second, a significant number of the club’s players are now in their 30s. Lewandowski will have already reached the age of 34 by the time the 2022-2023 season begins. So, the team will not become any younger.

The third and most crucial issue is that the Blaugrana has financial obligations that have surpassed one billion pounds. The addition of Lewandowski to their team would simply increase their salary bill. It is something that the club has recently been seeking to cut instead. A clearout of their roster is anticipated for the summer. The Blaugrana are staring down the barrel of a pivotal summer.