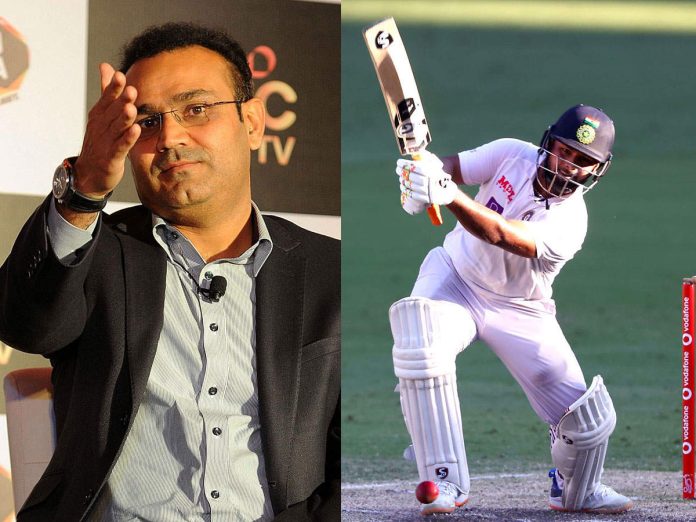 Latest Cricket News: Virender Sehwag, a former cricketer for India, believes that Rishabh Pant would be remembered as one of the sport’s all-time greats if he gets to compete in one hundred tests. To this day, only 12 Indian cricketers have amassed more than 100 Test matches played for their nation.

The young man, who is just 24 years old, has gotten off to a blazing start in his red-ball career. Pant has played in 30 matches so far. He has accumulated 1920 runs, with his top score being 159 not out. His performance as a wicketkeeper has also improved. He has 11 stumpings to his name at this point in his Test career.

What did Sehwag say about Pant?

According to Sehwag, if Rishabh Pant can maintain his level of play for an extended period, he will be recognized by future generations. During an appearance on the program “Home of Heroes” on Sports18, Sehwag stated:

“If he continues his career and plays in more than 100 tests, his name will be immortalized in the annals of cricket history. Only eleven Indian cricketers have ever been able to do this. All of their names are instantly recognizable.”

“Why does Virat Kohli place such a strong focus on competing in test matches? He is well aware that if he participates in 100–150 or even 200 tests, his name would live on in the annals of cricket history.”

During his maiden trip, the cricket player from Delhi, who was born in India, hit hundreds in both England and Australia. Additionally, he made big contributions during India’s most recent tour to Australia. It resulted in the country successfully defending the Border-Gavaskar Trophy.

Sehwag is widely credited with revolutionizing test cricket by introducing an aggressive style of play from the very beginning of the game. His accomplishments in this setting are almost unmatched.

Throughout his career, the Nawab of Najafgarh, as he is often referred to, had a pattern of hitting boundaries from the first ball. This was a hallmark of his game.

Virender Sehwag, when asked about his propensity for smashing fours from the first delivery of the ball, replied the following:

“Many people, including Tendulkar, informed me that I intended to knock the first ball over the boundary. But I never did. I would get myself ready to hit the first ball with the mindset that it would probably just be a loosener or a warm-up delivery.”

Virender Sehwag has scored 8586 runs in 104 Tests, with a strike rate of above 80 and an average of 49.34 for each innings. His impressive career in Test cricket was highlighted by 23 centuries and 32 fifty-plus scores.

The Twenty20 International series between India and South Africa is scheduled to begin on June 9th, 2022. The selectors have already chosen an 18-member squad. KL Rahul will serve as the team’s captain throughout the series. Rishabh Pant has been appointed the vice-captain of the Indian squad. The side also contains Dinesh Karthik and Hardik Pandya, both of whom are making a comeback to the Indian team.