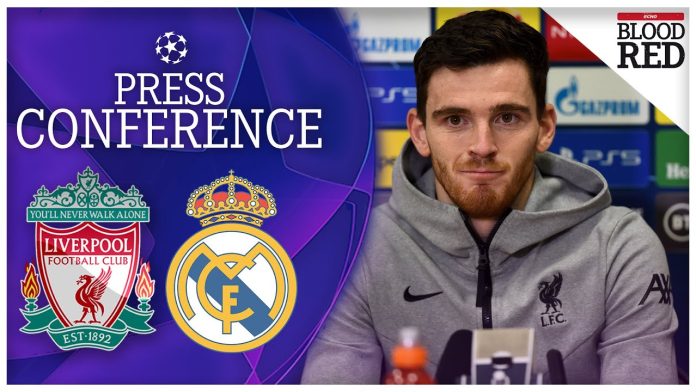 Latest Liverpool News: Liverpool’s star player Andrew Robertson is under the impression that Real Madrid has had more time to unwind and get ready for the final of the Champions League compared to his own team.

On April 30, Los Blancos clinched the La Liga title with four games to spare. Thus making it their earliest victory in the league in the 21st century.

The fact that they were able to take their foot off the accelerator, as a result, helps to explain why they were only able to win one of their last three games in the league competition.

Despite this, the Reds did not give up their pursuit of the Premier League crown until the very last day of the season on May 22. However, their efforts were eventually unsuccessful.

After a remarkable comeback from two goals down, Manchester City prevailed against Aston Villa at the Etihad Stadium to successfully defend their title. Going into matchday 38, City led the standings by one point.

Latest Liverpool News: Robertson speaks ahead of the UCL Final

It has been a long and difficult season, one that has undoubtedly taken its toll on their players as some of them have been sidelined with injuries as a result of the difficulty of the competition.

Recent knocks were sustained by Fabinho and Thiago Alcantara. But to everyone’s relief, both their own and the club’s, both players returned to training today and made the trip to Paris with the rest of the group.

Although Robertson said that Real Madrid may have a tiny edge in this area, he emphasized that they are in excellent health themselves. He said the following at a pre-match news conference, as reported by Liverpool Echo:

“Real Madrid have had a less hectic buildup since they finished their league season three weeks ago. They haven’t had to play at their best possible speed since maybe.

However, we are in the finest possible condition to fight for everything. We have every intention of doing so. We have overcome a lot of obstacles. There have been injuries and issues. But the boys are in top form.”

A “cup triple” is what Liverpool hopes to achieve this season

The Reds have already won the Carabao Cup and the FA Cup. So a victory in the Champions League would give them a chance to win a third championship this year.

They haven’t accomplished anything like this since 2001. Then they won the League Cup, the FA Cup, and the UEFA Cup all at the same time.

The team managed by Jurgen Klopp is a well-oiled engine that has plowed its way through the season and came agonizingly close to achieving a quadruple that has never been accomplished before.

Because Real Madrid has staged several incredible comebacks this year, the Reds will undoubtedly face a significant challenge from Real Madrid. But Liverpool can remain optimistic about their own possibilities.

In any case, we should be ready for a rip-roaring contest on Saturday!