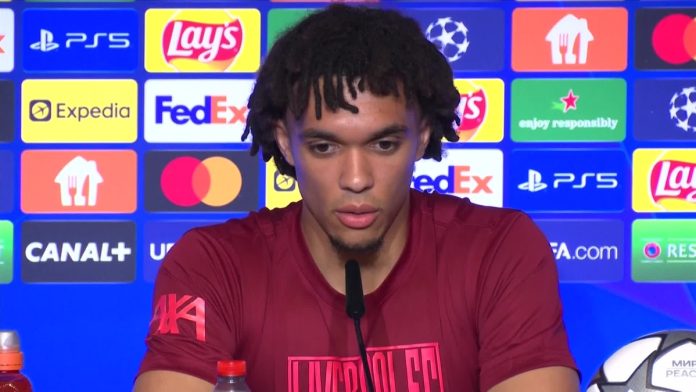 Latest Liverpool News: After the Reds were defeated by Real Madrid in the Champions League final, Trent Alexander-Arnold provided an update on the state of the team’s morale inside the locker room.

In an interview with BT Sport (which was obtained by SPORT), the teenage defender said:

“It is the natural consequence of being in second place in the final. The dressing room is devoid of conversation and in shambles.”

The player went on to explain why his team had lost a contest that they had dominated, citing the following factors:

“We had several opportunities. But the goalie that we discovered was amazing. To tell you the truth, I too believe that our performance should have been better. We got off to a shaky start in the second half. As a result, they were able to seize control of the game. These teams have so much experience that they know how to compete in the final.”

Alexander-Arnold made these comments about the goal that put Real Madrid in the lead and ultimately resulted in Liverpool’s loss:

“We are a pressing squad. Although this strategy has usually been successful for us, they have managed to catch us at the far post. After that point, it is really hard to get back into the game, especially when playing against a team that has so much experience that they know how to win these kinds of games.”

To be ready for another run in the Champions League, the Reds will need to go back to the drawing board and consider their options. Real Madrid was able to catch them at the last hurdle and prevent them from capturing what would have been their third title of the season. Although, they had been brilliant throughout the whole season.

Real Madrid came out on top against Liverpool in the most important match in club football. They won by a score of 1-0 to clinch the deal and bring home the Champions League trophy. On the other hand, the English team had to deal with a particularly difficult obstacle before beginning game preparations.

The Reds were unclear about the condition of their mercurial midfielder, Thiago Alcantara, as they headed into the final match. So there was some concern regarding the team’s chances. Because of an injury, he sustained the previous week when playing Wolves in the Premier League, the 31-year-old’s status for the game was in doubt before the start of play.

After some time had passed, the star player entered the contest. He took charge of the inventive part of the midfield for his team. However, Thiago, who began his professional career with Barcelona, was unable to find the extra push to overcome Los Blancos in Paris. The Reds were unable to go one up on the Madridistas.