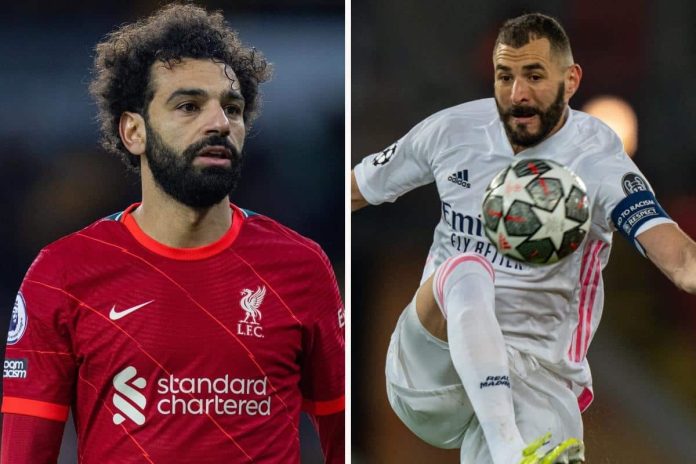 Latest Liverpool News: When it comes to the competition for the Ballon d’Or award, Ashley Westwood has opted to cast his vote for Real Madrid’s Karim Benzema rather than the star player for Liverpool, Mohamed Salah.

Benzema and Salah have been in tremendous form for their respective clubs. Both players have been critical in guiding their squads to the Champions League final.

Both Real Madrid and Liverpool’s top players have a strong case to be considered for the Ballon d’Or award this year. This is due to the number of goals and assists they have contributed to their respective teams’ campaigns thus far.

Nevertheless, in recent contact with the media, Westwood was straightforward about his decision and explained picking the French forward.

What did Westwood say?

The football analyst said that Real Madrid would not have been able to achieve the same level of success this season if Benzema had not been a part of the team.

“Because of the significance of Mohamed Salah to Liverpool, I believe this to be a challenging scenario. To score 44 goals in 44 games as a 34-year-old, and I believe he’ll be 35 in December, is quite an accomplishment. To put it another way, if Benzema had been on that squad, they would not have been the team that they were. Although Salah is indispensable to Liverpool, there is a possibility that Jota or Diaz would have scored more goals in his absence. Although Salah is irreplaceable, the team would have been able to succeed even without him.

Benzema, on the other hand, is one of those players that absolutely cannot be replaced at the club during the current campaign. Therefore, in my opinion, he has the upper hand. Despite the fact that he is growing older, he still manages to maintain the performance of becoming younger. As a result, I will give him the advantage in this regard,” said Westwood. Karim Benzema of Real Madrid and Mohamed Salah of Liverpool both have the statistics to support their claims that they should win the Ballon d’Or.

The statistics don’t lie, and when it comes to Benzema and Salah. So, his adage is completely accurate

This season, the striker for Real Madrid has notched up 44 goals and 14 assists for Los Blancos.

On the other side, Salah finished the Premier League season tied for the most goals scored with 23. It placed him in equal first place. As a result of his 13 assists during the season, he also won the title of Playmaker of the Season.

Both Benzema and Salah are now in a very good position to win the accolade. The Champions League final has the potential to decide which one of them will take home the trophy.

Both players will be hoping to lead their respective teams to victory in the major tournament in hopes of bolstering their candidacy for the Ballon d’Or. Winning Europe’s top competition will help their case for the Ballon d’Or. Now, we have to wait and see what eventually happens.