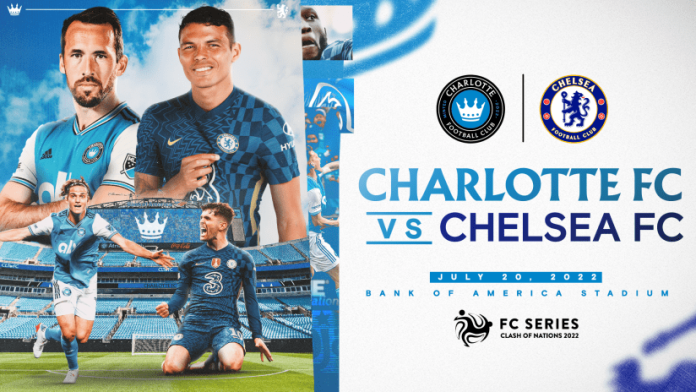 Charlotte FC vs Chelsea: When they play Charlotte FC on Wednesday night, Chelsea will try to make it two wins in a row to start their pre-season tour of the United States.

The Blues started getting ready for the 2022-23 season by beating Club America 2-1 on Saturday. Charlotte, on the other hand, lost to Inter Miami 3-2 in the last MLS game.

Charlotte was founded in December 2019, and this is the club’s first-ever MLS season. With 26 points from 21 games, they are currently in eighth place in the Eastern Conference.

The team coached by Christian Lattanzio is coming into this game after losing 3-2 at Inter Miami on Saturday. The home team came back from being down two goals to win the game.

Yordy Reyna scored twice to put the away team ahead in Florida, but Phil Neville’s team came back and won the game in the 93rd minute. On Tuesday, they will play a friendly against Barcelona.

Charlotte will have one eye on their next MLS game on July 23 against Toronto FC, but the game with Chelsea will be the biggest in their short history.

Christian Fuchs is a member of The Crown. After leaving Leicester City, where he won the Premier League title, he joined the club last year.

Chelsea, on the other hand, started their preseason on Saturday with a 2-1 win over Club America. Timo Werner and Mason Mount scored in the second half.

The Blues are now getting ready for their next two games against Charlotte and Arsenal. At the end of the month, they will play Udinese in their last friendly of the summer.

Everton will be the first team Thomas Tuchel’s team plays in the Premier League on August 6. The club will try to catch up to Manchester City and Liverpool in England’s top flight next season and also compete in the Champions League.

Romelu Lukaku, Antonio Rudiger, and Andreas Christensen have all left Stamford Bridge this summer. However, Raheem Sterling and Kalidou Koulibaly have come in as two exciting new players. More changes are likely to happen before the end of the transfer window.

Several Chelsea loan players are also back at the club this summer. Conor Gallagher and Ethan Ampadu are among those hoping to make an impression on Tuchel and make the first-team squad for next season.

After their game with Inter Miami on the weekend, Charlotte’s interim head coach Lattanzio will need to make sure that his players are still healthy.

Adam Armour and Vinicius Mello will not be able to play for the home team, though. Armour has a knee injury, and Mello has a problem with his foot.

For Chelsea, head coach Tuchel will make changes to the team that played against Club America last time. Edouard Mendy, Reece James, Mount, and Jorginho are all expected to be in the starting lineup.

Tuchel might want to give Gallagher another look right from the start. The England international could play with Jorginho, and Callum Hudson-Odoi could start again.

The midfielders N’Golo Kante and Ruben Loftus-Cheek can’t join Chelsea on their tour, though, because they haven’t had their COVID-19 shots yet.

Charlotte FC vs Chelsea: Where To Watch?

Fans can watch the game on chelseafc.com and the 5th stand app.

Charlotte will be a tough opponent for Chelsea because they are in the middle of their domestic season, while Chelsea has just started getting ready for the 2022-23 season. Tuchel, on the other hand, has a strong team in America, and we expect the English team to be too good for their opponents.