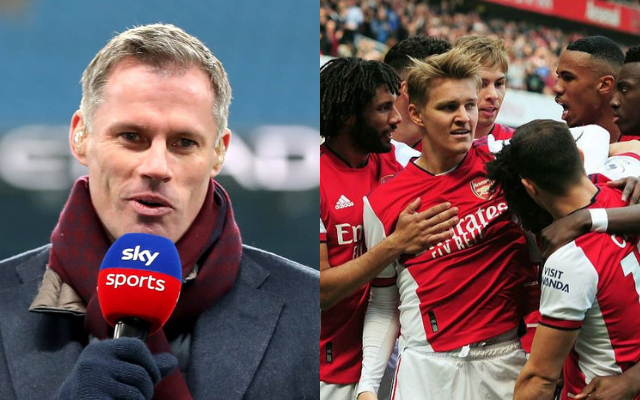 Arsenal News: Jamie Carragher thinks that if it weren’t for Nuno Tavares, Arsenal would have qualified for the Champions League this season.

In the last few weeks of last season, the Gunners were on track for their first top-four finish since 2016.

Mikel Arteta’s team, on the other hand, lost three games in a row in April. This gave Tottenham Hotspur the chance to move ahead of them and take fourth place.

Crystal Palace, Brighton, and Southampton all beat them, and young left-back Tavares played in two of those games.

Carragher said that he doesn’t like to single out players, but he thinks that the 22-year-old, who joined Marseille on loan “cost” his team.

He told Sky Sports, as reported by Metro, “I saw Nuno Tavares go out on loan. I think they would be in the top four right now if they had a better left-back. I don’t like to pick on one player, but I think he cost you some games.

I remember that game at Crystal Palace last year. It was on Monday Night Football, and I said on TV, “He has to come off at halftime.” I think that, in the end, he (Mikel Arteta) put Granit Xhaka at left-back.”

Arsenal News: This season, Arsenal will play in the Europa League, and they have added to their team

They are still interested in midfielder Youri Tielemans from Leicester City and have reportedly asked about winger Jarrod Bowen from West Ham United.

Arsenal didn’t lose any of their five preseason games. They scored 20 goals against Nurnberg, Everton, Orlando City, Chelsea, and Sevilla.

Ironically, they start their Premier League season on Friday night at Crystal Palace, but Arteta says his team is ready.

We’re looking forward to the season. We know that the game on Friday night will be very different, with a different setting and mood. We need to get ready for that.”

ALSO READ: ‘They Like The Player and Are Still Interest In Him’-Arsenal Is Very Close To Sign A Superstar Worth £55m