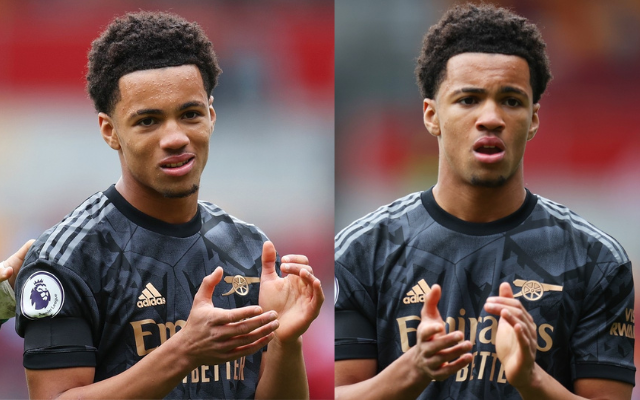 Arsenal News: Ethan Nwaneri made headlines today because he became the youngest player to play in Premier League history.

When the 15-year-old Arsenal player came on against Brentford, he was the youngest player to ever play in the English Premier League.

But a new report says that Manchester United and Liverpool are already showing interest in Ethan Nwaneri in the Premier League.

The report says that the two big teams might want to sign the young player. Manchester City is the other big club in the Premier League that wants the midfielder.

Before his first game with the first team on Sunday, Nwaneri had already made a name for himself at Arsenal.

Arsenal midfielder Ethan Nwaneri is in the headlines

Mikel Arteta gave the player time in the Premier League because of how well he played and how hard he worked.

It’s not clear how long the three clubs have been looking at the young player, but they all like him and want to sign him.

So far, Manchester United is the only team in the Premier League this season to beat Arsenal.

The Secret Scout said this about Ethan Nwaneri: “Ethan Nwaneri makes his senior Arsenal PL squad at 15 today. Manchester United, Manchester City, and Liverpool are looking to sign him.”

The kid might be someone to watch soon. At the Brentford Community Stadium, the 15-year-old came off the bench at the end of the game to replace Fabio Vieira.

The young player was moved up to train with the first team this week. The midfielder’s performances for the Under 21s this season impressed Gunners manager Mikel Arteta.

Nwaneri was supposed to spend the season with Arsenal’s Under-18 team, but he did so well that he was quickly moved up to the Under-21 team.

How will he perform going forward, will he feature regularly?

So far this season, he has scored four goals and set up four more for both the Under 18s and the Under 21s.

The teenager was then left out of the Under 21s match against Wolves on Saturday because he was told he would be training with the first team before their trip across London.

Nwaneri was not expected to come off the bench. But the fact that he did shows how much he has improved in the past year. In the end, he made his debut as Arsenal easily won 3-0.

Cesc Fabregas was the youngest player to ever play for Arsenal. He was 16 years and 177 days old when he played against Rotherham in the League Cup in 2003.

Both of these records have been broken by the teenager, who played for the Gunners in the 90th minute.

ALSO READ: ‘He wasn’t bad last time, but it’s sad to not see our captain today’-Arsenal Fans react as Fabio Vieira starts for Arsenal against Brentford

Why not Real Madrid or Barcelona or Munich? Is their scouting crap?

They're so scared of us😭

He's staying even Arteta said he's going no where

Good luck with that, we have Richard the garliator 😂

Considering that the second half of last season half the bench was consisting of youth players that never got a second on the pitch in the league it shows Arteta see something in this lad to give him a couple of minutes on the pitch for a 15 years old in the league.

They went after all our targets in the summer. Martinez, Raphinha and Jesus now they want our 15 year old youngster. They are all scared😂😂

Arsenal will not sell this player. Our team is bigger than Liverpool and Manchester United.😉👍