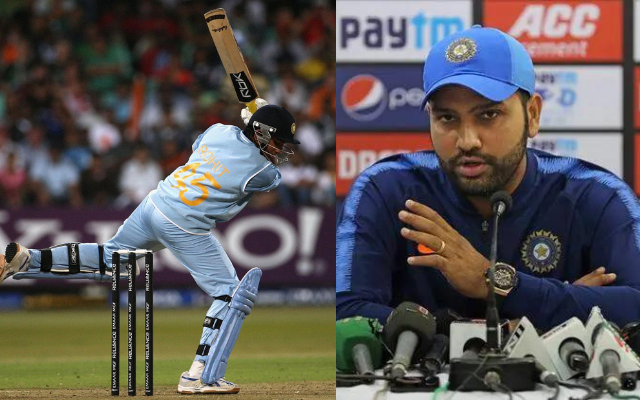 Rohit Sharma has been one of the most important people in Indian cricket for a long time, even before the last decade. The captain of Team India has dominated the international scene in both forms of white-ball cricket and is also becoming more important in Test cricket.

Rohit has also made a name for himself as a good tactician. The five IPL titles won by the Mumbai Indians (MI) under his leadership are proof of this. He will be leading India in an ICC event for the first time next month when the Men in Blue go to Australia for the T20 World Cup.

In fact, it all started for Rohit on this day at the ICC World T20. During India’s must-win Super 8 match against England, a stylish Mumbaikar earned the cap. Even though he didn’t get to bat in his first match, he made a big impression the next day when, under pressure, he hit a beautiful half-century against South Africa.

On the 15th anniversary of his first T20I, fans on Twitter gave the Indian captain a lot of praise. Some people said he was the best international player of all time, while others remembered some of the important knocks he made over the years.

Rohit Sharma completes 15 years in international cricket, fans are loving every minute of it

When a three-match home series against Australia starts on Tuesday, India will try to figure out their lineups, especially in the middle order, and give their plans for the ICC T20 World Cup 2022 their final shape.

Even though a few fast bowlers will be rested over the course of six games before the World Cup (three games against South Africa will follow the series against Australia), India has a full squad to choose the best combinations from.

The T20 format requires a lot of flexibility. But India captain Rohit Sharma said before the first T20 that he wanted his players to give him “all the answers” before the big ICC event in Australia. India did well with the bat in the Asia Cup, but they made a lot of changes to their team during the tournament.

Here is how the fans reacted on Twitter, to show their support to the Indian and Mumbai Indians’ skipper:

Who knew this boy would’ve become the GOAT. 🐐💫

And he is the first Brahmin to achieve this feat 🙏🏿

God of T20is for a reason

He willl need to improve his record against Australia in India. He averages 8.40 against Aus in India. Kuldeep Yadav averages 16 with bat.

Well, whether you like him or not, one can’t deny the contribution of the HITMAN. He has been crucial to Team India’s success in recent years. The opening batsman has contributed in all three formats honestly and his role in the team is now evolving.

The T20 World Cup seems to be the next major tournament that is coming up. The fans will be keen to see their favourite player perform. Team India needs to leave their mark on this competition. They have been weak in recent times and have let the fans and themselves down. Rohit Sharma and Rahul Dravid will want to change things around this time. Let’s wait and watch!!