“Shambolic Defence Topped By Sergio Busquets”, Fans React as Barcelona Suffer Yet Again at the Hands of Bayern Munich 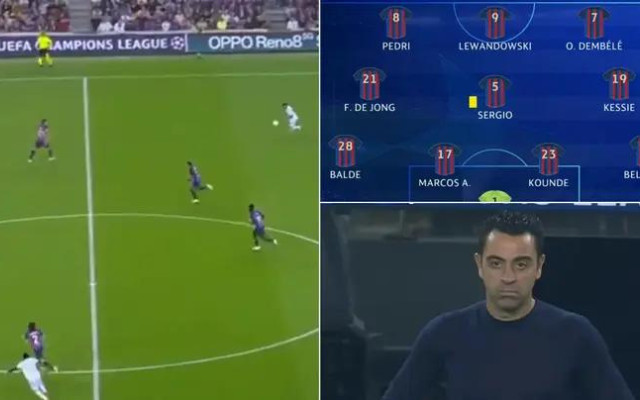 After giving up two goals to Bayern Munich in the first half of their Champions League game, Barcelona fans were very angry with their team. Things did not go as per plan for the Catalan giants, who were hoping to salvage some pride from this match. However, it was just not meant to be.

Barcelona was already out of the competition before the game started. This was because Inter Milan had already beaten Viktoria Plzen in the other game in the group on Wednesday. So, this game was more to do with pride than anything else. And helping Barca build some momentum.

It meant that Barcelona could only tie Inter in points. Inter was guaranteed to finish higher in the group because they had a better record against Barcelona.

Even though Barcelona had already given up on making it to the next round of the competition, they still had to go to the Nou Camp and play group leaders Bayern Munich.

Barcelona’s coach, Xavi, put out an unusual back four for the game. Hector Bellerin and Alejandro Balde played as fullbacks. Marcos Alonso and Jules Kounde played together in the middle.

ALSO READ: “He Has Had A Few Problems, He Can Be Too Rash”, Jamie Redknapp Names The Player Who Is The Biggest Issue For Arsenal

And it only took Bayern 10 minutes to get through Barcelona’s defence. Sadio Mane, who used to play for Liverpool, beat Bellerin for speed and put the ball past Marc-Andre ter Stegen.

Eric Choupo-Moting finished off a fast counterattack by Bayern to make it 2-0 later in the first half. This made Barcelona fans angry on social media.

Before halftime, Barcelona thought they had found a way back into the game when referee Anthony Taylor gave the home team a penalty after Matthijs de Ligt brought down Robert Lewandowski in the penalty area.

But after he looked at the monitor next to the field, Taylor changed his mind and Bayern kept their 2-0 lead at halftime.

Inter beat the Czech team 4-0 in the early match on Wednesday, thanks to two goals from Edin Dzeko and one each from Henrikh Mkhitaryan and Romelu Lukaku. They now have 10 points from five games. Barca is six points behind them in third place before their match with Group C leaders Bayern.

What’s next for Barca as this season starts to crumble down for Xavi and co. once again?

Being kicked out of the Champions League and into the Europa League is a huge financial blow to the Camp Nou team. Barca had to sell off assets over the course of the summer to pay for the big-money deals they made in the transfer window to get players like Robert Lewandowski, Raphinha, and Jules Kounde. But if the club doesn’t stay in the Champions League, they will lose a lot of money this year. This could be very bad for Xavi’s team.

Before their match on Wednesday, Barca had lost nine of their 12 Champions League games against Bayern.

We have 3 losses and no clean sheets in the Champions League this season where Piqué has not started and no losses when he has started.

But you’re telling me he’s the sole reason we’re playing in Europa?

When can xavi see that busquets keeps killing us!!! Putamare, every fuckin goal comes from the mid. He needs to be there to stop plays from developing!!!

I don’t understand, you hijacked Chelsea’s transfer window, you would surely into the RO16, no?

Kounde getting destroyed by Mouting 😭😭😭😭😭😭😭

We need an experienced manager

But Xavi said Alonso is fast?

so when we go out early in Europa league when is it time to question xavi? a coach with 0 coaching experience in europe.. what can you realistically expect?