The iconic Spanish midfielder, who currently plays for French club AS Monaco, left Arsenal after a sensational seven years stay at the Emirates. Fabregas made over 300 appearances for the Londoners and also captained the club in the latter part of his career there. In 2011, he left the Gunners to return to his boyhood club Barcelona but the second spell in Camp Nou did not happen to be a memorable one. Since then Arsenal signed a lot of other midfielders, though none of them have been as special as Fabregas.

He was played out of position most of the time as Barcelona had some legendary midfielders like Xavi, Iniesta and Busquets in the central midfield. In the summer of 2014, Jose Mourinho brought Fabregas back to London but this time for Arsenal’s arch-rivals Chelsea. Arsenal is still to fill his gap when Chelsea had some successful years with him in the squad. Fabregas left Chelsea after four and a half years after winning major titles. So, Let’s look at some of the midfielders Arsenal signed to replace Fabregas.

The 20-year-old French youngster joined Arsenal in 2018 and since then he has emerged into a first-team player for them. The deep-lying central midfielder is hyped as a world-class talent and has got it everything in his locker at the moment like passing, winning tackles, or dribbling past opponents. He has made 76 appearances for the Gunners in all competition so far scoring one goal and four assists to his name.

The former Arsenal Captain is a key man for Arsenal since he joined the club. Under Mikel Arteta, he has been one of the first names on the team sheet. But during his career in north London, the 27-year-old has been very much controversial. The captain’s armband was taken off from him after he said fuck off to some of the fans who were frustrated at him after a defeat. Current gunners boss though has immense praise for his player.

“It is everything – his commitment, I like the way he is, the way he lives, his professional(ism), and the way he trains,” Arteta said.

“The way we want to play, there are not as many with his quality on the ball and the way he eliminates passes and the range of his pass. I am delighted to have him.”

In 2011, Arsene Wenger signed this bright young prospect from Southampton. In six seasons, Chamberlain won three FA Cups for Arsenal. But inconsistent performances never made him a regular starter for the gunners and in 2017 he rejected a contract at Emirates to sign for Liverpool and won the Champions League with them last year. 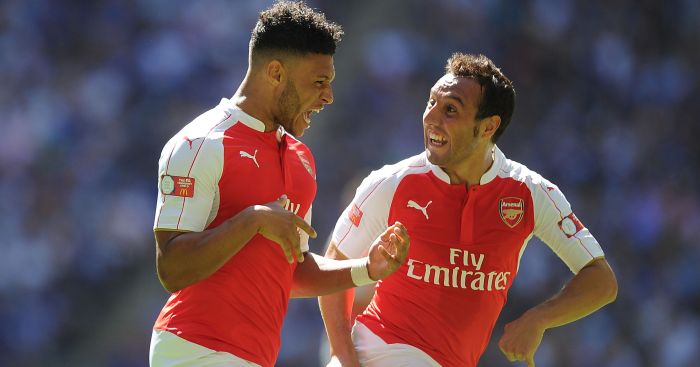 One of the very special players for the Arsenal fans, the veteran Spanish attacking midfielder played for four seasons at the Emirates. 12 goals and 14 assists in his first two campaigns made him an important part of the Gunners’ squad but injuries kept him out most of the time in the latter part of his Arsenal days. There is no doubt about this name to be at number one on this chart. The 31-year-old German international joined Arsenal in the summer of 2014 in a record transfer fee of £42m back then from Real Madrid. In the past six seasons, Ozil has 39 goals and 50 assists to his name and is currently an iconic player for Arsenal.

Arsenal signed him to bring glory to the Emirates once again and indeed he did that. It was a turn of events under Wenger when the former World Cup winner joined the north London side from Real Madrid back in 2013.

The Loss That Was A Huge Sign Of Things To Come...