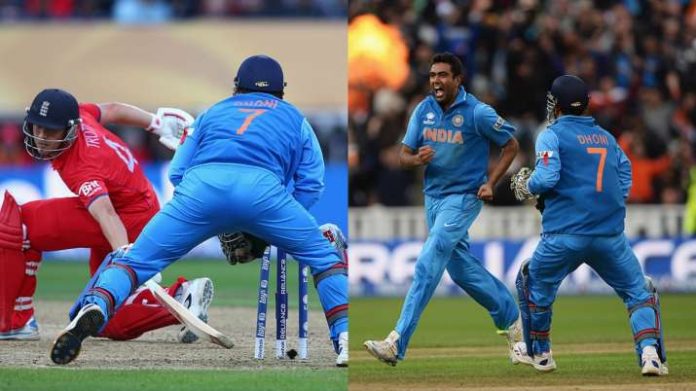 India went into the Champions Trophy 2013 on the back of a spot-fixing scandal after the conclusion of the IPL. The then Indian skipper MS Dhoni had to face many questions from every corner regarding the spot-fixing issue. People all over the world thought that the MS Dhoni-led Indian Cricket Team can not perform well in the ICC Champions Trophy. However, the Men In Blues put up an inch-perfect performance in the whole tournament. They remained unbeaten in the whole tournament. Team India defeated the hosts England in a shortened game in the finals to win the Champions Trophy. Indian fans will always remember that match.

Incessant rain interrupted the match and was a danger to the final. After about 5 hours, it relented, and both the teams could manage to play a T20 match. India posted a total of just 130 runs on the board after losing the toss. England had a heavy advantage after the first innings. Jonathan Trott was batting very well for England and was on a score of 20. In the sixth over the innings, a Dhoni brilliant stumping off the delivery of Ravichandran Ashwin sent back Trott.

Ashwin recalled that incident during a chat with Suresh Raina on Insta Live last week. He revealed the way how Dhoni devised Trott’s dismissal. Ashwin said that MSD approached him at the beginning of the over and told him to bowl from round the wickets, so that if the ball turns then there will be a stumping chance down the leg side.

“Trott got stumped off the first over that I bowled. I still remember Mahi bhai came up to me and said ‘Trott ko over the stump se mat daalna sirf round se daalna. Woh leg side mai khelne jaayega agar ball ghoomega to stumping ho jaayega’.

“Mujhe abhi bhi dimag mai nahi chal raha hai ki kaise bola waisa (Stay round the wicket for Trott. He will look to play on the leg-side and if the ball turns, he will get stumped. I am still not able to figure how he said that),” Ashwin said.

The match went right to the final over. It was a thrilling encounter between the two sides. England were cruising at one stage when Ravi Bopara and Eoin Morgan were batting. However, MS Dhoni’s decision to give Ishant Sharma the 18th over shifted the match towards India. England then crumbled under pressure and India achieved a memorable five wickets win in the finals.

Though a similar feat could not be repeated by team India in the 2019 World Cup under Virat Kohli, they did well for themselves. The performance would have made the nation proud. However, another World Cup win is the need of the day. They should have done better in England in the semis against New Zealand.

However, what is gone, is gone for now. If the team can deliver that soon, it will be yet another huge moment to cherish for the billions of cricket fans across the nation.