The BBL 2020 Story- Brisbane Heat’s Mark Bryant jumped over the boundary, caught the ball and threw it right inside the fence, saving six runs for his side versus Melbourne Stars. His save could be called as the one that caused Melbourne’s defeat as the Brisbane Heat’s winnings margin came down to four runs (DLS method).

The Brilliant Save In The BBL That Went Viral

After reducing Melbourne Stars to 72/5 in 7.2 overs as Glenn Maxwell and company were chasing a 115 run target in 10 overs, it was Irish batsman Nick Larkin hitting the big shots and taking on the Brisbane attack. The 30-year-old hit sixes one after the other, hinting at a one-man show at the Carrara Oval, Queensland.

On strike, Larkin hit four of the first ball off Lewis Gregory in the ninth over. He then went for another big hit, between mid-on and deep mid-wicket boundary. It was a well-hit stroke that nine out of ten times would’ve been a six, but Max Bryant had other plans.

The Aussie player, fielding at deep mid-wicket, jumped high with intentions to catch the ball. He did hold on to the ball but realized that he was going to fall on the other side of the boundary, so he threw it in. Not only the crowd behind Max, but all the players on the field stood amazed. Nick Larkin stood looking at a potential six being blocked in sheer disbelief.

How Twitteratti Reacted To The Save?

Twitteratti described Max’s save as an out of the world effort. A user said that this save can be appreciated by anyone, cricket fan or not.

“Outrageous! Even if your not a T20 fan you can really appreciate this fielding is out of this world! ??”

“It is the casual thumbs up to the crowd that makes the piece of fielding from Max Bryant even better. Just another day at the job.”

One of them tagged IPL team Royal Challengers Bangalore, saying that Max Bryant was the opener Virat Kohli’s men need.

“Maxbryant will be the opener @RCBTweets looking for in @IPL 2021 edition clean hitter can muscle the ball over 100 meters and can field well too @imVkohli @ABdeVilliers17.” 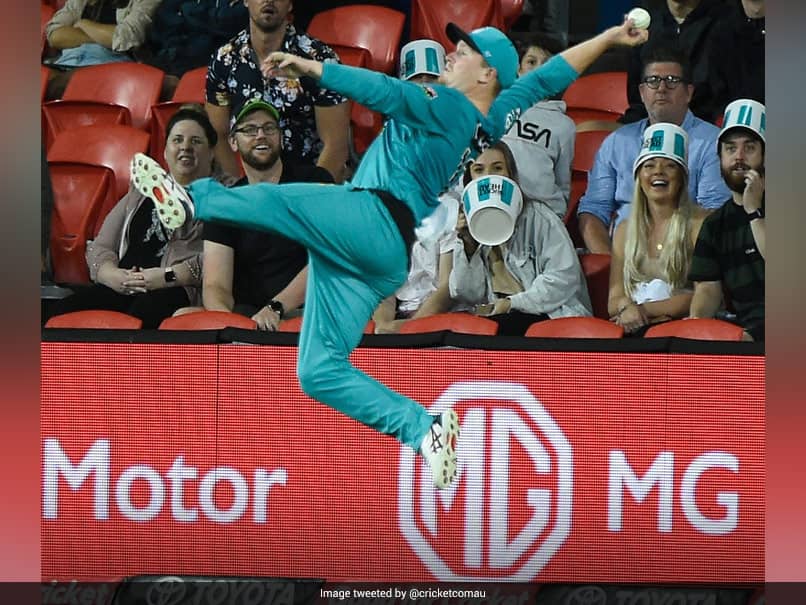 What About The Game And This BBL 2020 Match?

Earlier having chosen to bat, Brisbane Heat’s Nick Bryant started off well and scored 31 runs off 28 balls. However, it was the other opener, Chris Lynn who was the adjudged man of the match, as the Queenslander went on to score 48 runs off 23 deliveries. Coming back from a disappointing test series, Joe Burns finished the game on a high.

In the post-match ceremony, Chris Lynn, the man of the match said,” Tricky conditions and it wasn’t easy for the bowlers with the wet ball, so just tried to cash in. Pretty happy to lose the toss looking back now. We are starting to click as a unit. The youngsters stood up with the ball at the back end. We just got to maintain the momentum.”

Share
Facebook
Twitter
Pinterest
WhatsApp
Previous articleSourav Ganguly Has A Heart As Strong As When He Was 20 Years Old: Dr Devi Shetty
Next articleICC Posted Funny Picture Featuring Faf Du Plessis; Deleted It Later Though Twitteratti Had A Laugh