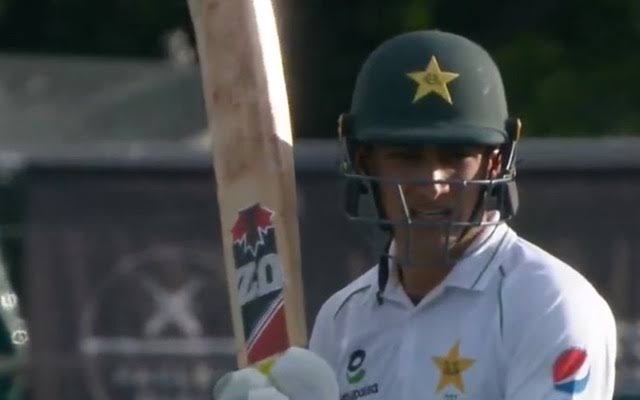 With Pakistan etching towards 300, the stump mic caught some hilarious conversations between Shah and his partner Mohammad Abbas as the former told the latter that he had responsibility to carry the responsibility of scoring.

A 17-year-old Naseem Shah is the youngest in the Pakistani dressing room on their tour of New Zealand. While players like Shaheen Afridi (20) and Zafar Zohan (25) are also a part of the team, Shah carries out significant responsibility in the bowling department taking regular wickets.

Coming off a well fought first test match, Pakistan were put on to bat in the second and final test at the Hagley Oval in Christchurch. Sunday remained neutral for the two teams, Pakistan scoring 297 runs in 83.5 overs. Azhar Ali led the way with his 93-run knock and skipper Mohammad Rizwan followed with another well paced half-century.

After a build up, a hope to touch the 300 run figure, Naseem Shah came in a 11, asking Abbas to give him a quick single.

“Abbas bhai, Abbas bhai, aapko pata bhi hai sari zimedaari mere uper hai. Single karna hai warna daant par jayegi,” Naseem said. (The above statement translates to – Abbas brother, you know all the onus is on me now. You have to take a single else you will get scolded in dressing room).

Summary of the match so far:

Earlier in the match, it was youngster Kyle Jamieson who had an enjoyable day. The pacer summated the first innings with a fifer, his only second in test wicket. Jamieson, rocked the Pakistani middle-order- Harris Sohail, Fawad Alam, Mohammed Rizwan and Faheem Ashraf all falling to him. The 26 year old broke opener Abid Ali’s resistance early in the day. Following Jamieson was Trent Boult, who picked the last two wickets to finish the tail. Tim Southee was the first to be amongst the wickets as he sent back Shan Masood for an 8-ball duck.

Abid Ali and Azhar Ali stitched a 62-run stand for the second wicket but Jamieson rattled the former and took down Pakistan from a comfortable looking 66/1 to 83/4. Today, coming out to bat at a fragile position, skipper Mohammed Rizwan again lived up to the expectations, scoring a quick-fire 61 off 71 balls, with the luck favouring him considerably. Azhar Ali and Rizwan showed resistance but the latter finally edged Jamieson to Waiting. Looking at the score on first day– 297 looks like a par total given the ball moved early on.

Naseem Shah who made the big headlines was dismissed off Trent Boult, when he was caught by Tom Latham. A Short of length across off, after a couple of inswingers earlier meant Naseem Shah was obliged to play the dismissing ball. One could say that the set-up was too good. For a bowler with almost no expirience of batting for more than 20 balls.