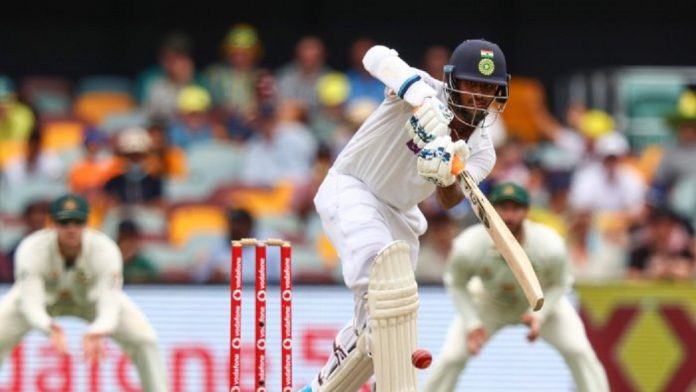 Washington Sundar is the name millions chanted in India on Sunday morning as the Off-spinner played one of the best innings by a No 7 batsman when the Indian team was down and dusted. Stitching a 123 run partnership, more importantly, facing 217 deliveries, Shardul Thakur (67 runs off 115 balls) and Washington Sundar (62 runs off 144 deliveries) brought the first innings total as close to the Australian total as 33 runs.

However, one defining shot of the innings that stood out was when Washington Sundar – who was taken quite lightly by the Aussie attack – took on to his Australian counterpart Nathan Lyon and launched a humongous six. It was the last ball of the 104th over, Lyon tossed up the ball offering Sundar a passage to let go of the pressure at once and the Indian bowling all-rounder sat down to clear the ropes at mid-on. The best part he didn’t even bother looking at the shot.

The last time India’s numbers 7 and 8 scored 50+ in same innings in an away Test, neither of them being a wicketkeeper was a long time ago. It was back at Manchester in 1982. This was when Sandeep Patil had scored 129* and  Kapil Dev had scored 65.

The Story Of The Fourth Test Match That Went Viral

Sundar became the second Indian player to hit a 50+ debut in his batting innings and take three-plus wickets in his debut bowling innings. This was after Dattu Phadkar (51 & 3/14 vs Aus, SCG, 1947/48). What a great feat that was and he made the whole country proud!!

Twitterati lauded Sundar’s knock and took shots at the lousy Aussie bowling for the tailenders.

“The way India’s?? bench strength has played out…. It has to be the best in the world right now ?

The onus now on Regular 11 (Senior pros) to win matches & take India to greatness or make way for upcoming ones.

No one! I repeat NO ONE is Irreplaceable! # INDvAUS #AUSvsIND #Gabba #AUSVIND, ” a Twitter user said.

Commentator and pundit Harsha Bhogale also took on Twitter to appreciate Shardul Thakur and Washington Sundar, who took the game away from Tim Paine and company. What Harsha Bhogale Tweeted About The Washington Sundar Shot?

“Extremely impressed with the fighting attitude shown by @Sundarwashi5 and @imShard. They have symbolised what India has been in this series, consistently punching above their weight. It is so satisfying to see…”

“Australia Should Give Nationality to @Sundarwashi5 and make him play for their country that too as Captain. He is Evidently a Better performer than @tdpaine36.#AUSvsIND #AskAakash”

However, post-playing the innings of their lifetimes, Shardul Thakur was bowled by Pat Cummins. A typical back of a length ball outside off by Mitchell Starc forced Washington Sundar to arch it towards the third man. It went straight into the hands of Cameron Green. Earlier Australia enjoyed a better day when they managed to pull back India to 186/6. This was as Ajinkya Rahane and company tried to match Australia’s 369. Indian were bowled out for 336, trailing by 33 runs.