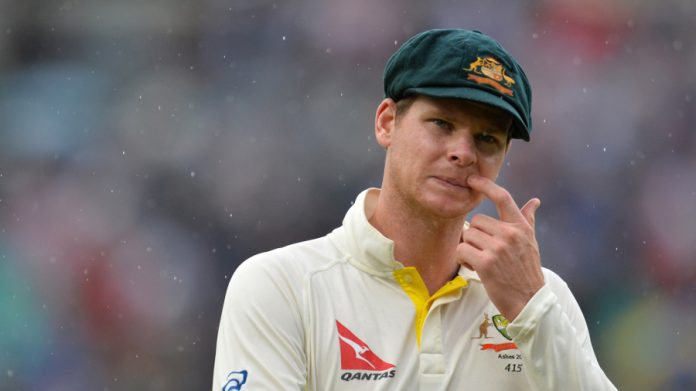 Steve Smith has been at the centre of controversy due to what he did in the match against Team India. The fans were on his back for his controversies. He has not been a real fan favourite in recent times. Not just in India but Australia as well.

However,  another video of the Australian batsman went viral this time. It was from the Sheffield Shield, a tournament that is going on at present and the world is watching. The game was between New South Wales and Victoria.

The Video Of Steve Smith That Went Viral From This Game

It was Steve Smith who batted as his usual self and reacted in a funny way. His stances and post-delivery movement caught the attention of the fans.

In no time, he started trending on Social Media and the video went viral. The fans were once again talking about him. It barely takes him any time to draw a lot of attention. That was the case once again and he was the talk of the town doe the fans.

Though Steve Smith barely scored seven runs, he caught everyone’s attention. It was with his funny antics that made everyone laugh. That too, just before the IPL auction, where he could surely be thr most-talked player.

The Incident That Ruined The Reputation Of Steve Smith

It was Team India working hard to fight for a win at Brisbane. The Aussies were frustrated and Steve Smith did what he does best. He tried to disrupt the batsman.

Fans and Pundits did not appreciate his action. Due to this, he even got removed as the skipper of the Rajasthan Royals. He was eventually released by them as well. That was prior to the IPL 2021 auctions.

What Next For IPL 2021 And The Franchises

All the franchises will be keen on adding some fresh blood, ahead of the upcoming  IPL tournament. There will be ten teams from the upcoming campaign. Due to that, it will be  important for the teams to plan long-term.

Steve Smith could be a strong and reliable option for the future. That is if a team decides to take the risk and buy him. It will be a risk as teams may not want to hurt their reputation.

Steve Smith is one of the best batsmen in the world. He is right there at the top with the likes of Virat Kohli, Kane Williamson and Joe Root. That is especially in the Test format. Let’s see if he can win an IPL title soon or not. The big teams will want to add him to their squad for better stability for sure.