The 14th season of the Indian Premier League (IPL) is already on. In the opening match of IPL 2021, Royal Challengers Bangalore beat defending champions Mumbai Indians. In the second match, Delhi Capitals registered an emphatic victory over Chennai Super Kings. Now, in the third match of IPL 2021, Kolkata Knight Riders (KKR) have beaten the Sunrisers Hyderabad by 10 runs.

Now, after Sunrisers Hyderabad’s defeat against Kolkata Knight Riders, former India opener Virender Sehwag has come out with a cryptic tweet. In his tweet, he has said that teams that will consist of stat-padding batsmen, who will bat more overs without accelerating will struggle in this IPL. This will not allow the hard-hitting batsmen to get many many overs and make it tough for them to leave any impact. Shewag stated that such teams struggled in the IPL last year and will struggle this year as well.

“Teams that will have stat-padding batsmen end up batting long overs without changing gears quickly will struggle. Depriving hitters and finishers by leaving very few balls and making it very difficult. Happened last year, and such teams will struggle always #IPL.”

Teams that will have stat padding batsmen end up batting long overs without changing gears quickly will struggle. Depriving hitters and finishers by leaving very less balls and making it very difficult. Happened last year, and such teams will struggle always #IPL

Sehwag’s dig might have been towards Sunrisers Hyderabad and Manish Pandey. Chasing a total of 188, Manish Pandey came to bat at number 3. He stitched together a good partnership with Jonny Bairstow after the early fall of wickets. However, in the middle overs, Pandey showed a lack of intent and was not scoring as per the required rate, and the pressure got to the Sunrisers Hyderabad. He did score 61 runs off 44 balls, but that intent was missing when the required rate was creeping.

We all expected the hard-hitting Abdul Samad to come to the crease a lot higher. He came to bat at number 7 when Sunrisers had already fallen behind the required rate. He hit two bloody blows off Pat Cummins and scored 19 from 8 balls, but that was not enough to take the Sunrisers Hyderabad past the winning line. Through his Tweet, Sehwag might have pointed toward Manish Pandey’s lack of intent and Abdul Samad coming late down the order. 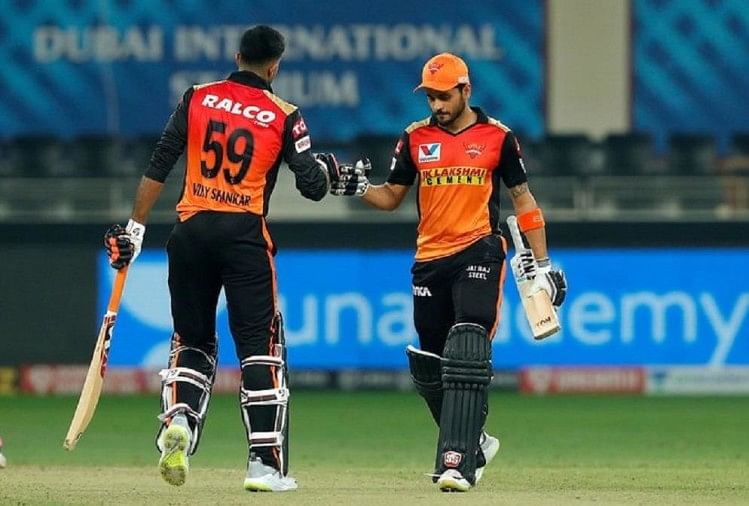 Coming to the match, Sunrisers Hyderabad captain won the toss and elected to bat field first. Nitish Rana was the standout performer for KKR scoring 80 off 56 balls. Rahul Tripathi was an able partner at the other end scoring 53 runs off 29 balls. Dinesh Karthik’s finishing touches of 228 off 9 balls guided KKR to 187/6 in their 20 overs. Rashid Khan was the leader of the SRH bowling as he picked up 5 wickets in his 4 overs giving away 24 runs.

In reply, SRH lost two early wickets in the form of David Warner and Wriddhiman Saha. Jonny Bairstow scored 55 runs off 40 balls. However, once he got out it became too tough for SRH as they fell short of the target by 10 runs. Prasidh Krishna was the standout performer of KKR bowling, picking up 4 wickets in his 4 overs and conceding 35 runs. Andre Russell picked up the other wicket.