The Troll During MI’s Innings- On April 13, Tuesday, Mumbai Indians registered their first victory in the 14th edition of the Indian Premier League (IPL). They lost their opening match against Royal Challengers Bangalore by 10 runs. Now, in their second game, they scripted an incredible comeback. They pulled their way at the back end of their bowling against KKR at the MA Chidambaram Stadium in Chennai.

It was a game that left many fans in shock. The Ambani trolls hit Social Media post this win. However, the game in itself was just incredible.

Fan wanted speech to continue after MI’s innings; as they were batting against KKR

During the match, the Chief Minister Of Maharashtra, Uddhav Thackeray, went live on Facebook and addressed the netizens. He explained to them the rules and regulations to be followed during the lockdown that will start from April 14.

“Sir continue to address the people of the State during the mid-innings break as Mumbai Indians are currently batting”, commented the fan on Uddhav Thackeray’s Facebook Live. On Tuesday, Maharashtra registered 60,212 fresh cases of COVID-19. The Maharashtra Government will impose section 144 from Wednesday onwards. 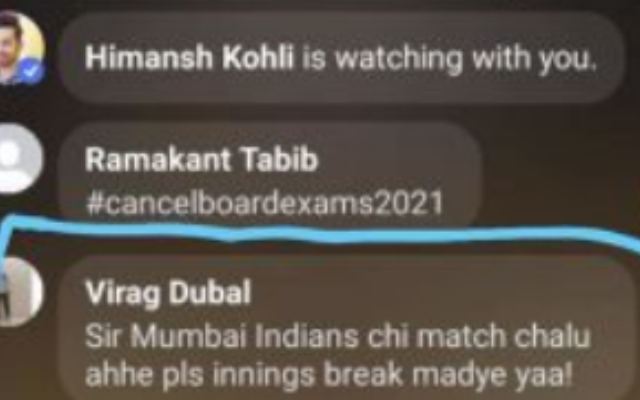 Coming to the match, KKR won the toss and asked Mumbai Indians to bat first. Mumbai could manage to score 152 runs in their 20 overs. During their bowling, MI scripted an incredible comeback, which restricted the KKR score to 142 runs. Mumbai Indians captain Rohit Sharma was extremely pleased with this performance from his boys.

He said that he is proud of the efforts each and everyone put into this victory. There isn’t a match like this often. He feels that his team will take confidence from this victory and move forward. Rohit Sharma also feels that KKR played exceedingly well in the powerplay.

“Was a great fight-back, excellent fight-back by each one of them. You do not see a game like this often. Lots of confidence from this game and we move forward. KKR batted brilliantly in the powerplay.”

Rohit heaped praise on Rahul Chahar and Krunal Pandya for bowling match-turning overs with KKR in the driver seat. Chahar brought the game to Mumbai by picking up 4 wickets. He became the Man Of The Match. On the other hand, Krunal Pandya bowled economical overs with an economy rate below 4. Rohit feels that it is a team effort and he gave the credit to all the bowlers. he feels that in Chennai, you can’t hit from ball one. You need to carry on as a batsman.

“Rahul came and got us crucial wickets in the middle. Krunal bowling those overs at the end was vital as well. It was a complete team effort and credit to all the bowlers. As batters, you need to carry on. The trend in Chennai is you can not hit from ball one. You have to plan before you go into bat. We were 15-20 runs short.”