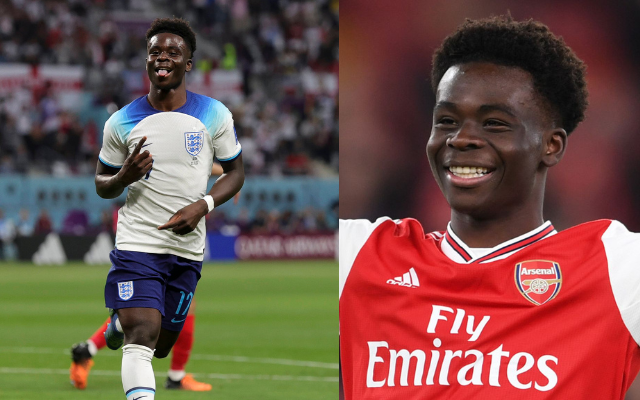 A Spanish news outlet called Defensa Central said that Real Madrid is looking at Bukayo Saka. The current La Liga champions are keeping a close eye on how the in-form Arsenal attacker does with his club and country.

Bukayo Saka is one of the few recent examples of a key player from Arsenal’s Hale End academy making it to the first team. The 21-year-old played for Greenford Celtic and Watford’s youth teams before making it to Arsenal’s main team. In the last four years, he has gotten better and better.

The English player is having a good season, scoring seven goals and setting up seven others in 27 games. At the same time, Saka is a key player for England and has gotten off to a great start at the 2022 FIFA World Cup. And the way he plays has caught the eye of Real Madrid.

The current La Liga champions are always looking for ways to make sure that the first-team squad can make smooth changes. They are also looking for ways to replace Eden Hazard, who isn’t doing as well as he should. Also, Marco Asensio’s future at Real Madrid is also uncertain.

ALSO READ: “30-Year-Old Midfielder in the Shortlist”, Arsenal Fight With Newcastle United for the Signing of a New Player

He might still sign a new deal with Real Madrid if talks between the two sides go well. But despite what Hazard said recently, it seems like there is no way back for him at the Santiago Bernabeu. So, Saka has become a real possibility for Real Madrid. His versatility is his best quality.

But if the Merengues try to get the 21-year-old, Arsenal will fight hard to keep him. The English player is the face of Mikel Arteta’s plan for Arsenal. He will lead their attack for the next ten years. And the Gunners are said to be sure that they can sign him to a new long-term deal.

Recent reports also say that Saka wants to stay with Arsenal and is ready to sign a new contract. So, if Real Madrid tries harder to sign the player who is in good form, they might not be able to get him.

Arsenal transfer target Youri Tielemans has given a new hint about a possible transfer as he gets ready for Belgium’s first World Cup game against Canada.

The Gunners want to sign a new central midfielder. Football.london knows that Tielemans is a player they have liked for a long time. As football.london reported in the summer, Arsenal has already agreed to personal terms with the 25-year-old. But they are willing to wait until next summer to sign Tielemans for free when his contract ends.