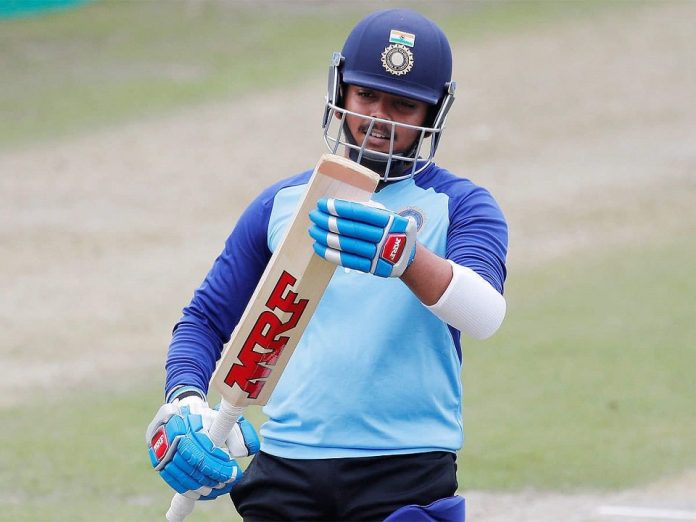 Indian opener Prithvi Shaw took a blinder at short mid-wicket to dismiss Australian Test team’s regular captain Tim Paine during India A’s Test match against Australia A. Paine, batting at 44 got out. He pulled a short ball hoping to add another four runs and get closer to the 50 run mark, but Shaw with a hand in the air, leapt to claim a stunner and hand Umesh Yadav his third wicket at the Drummoyne Oval, Sydney.

The Story That Went Viral For Team India A

The catch not only broke a stubborn 102 run partnership between wicketkeeper-batsman Tim Paine and debutant Cameron Green. It also motivated the team to garner two more wickets by the end of the day.

Australia’s innings that started off a stumble owing to a lethal opening spell by Umesh Yadav. It was stabilized by Paine (44) and centurion Cameron Green. The latter remained not out at 114.

To describe the situation of the catch- the Indian bowling attack that downed Australia to 98/5 were struggling to get past Tim Paine and Cameron Green. The duo kept adding runs at a regular pace. Umesh Yadav who dismissed both the openers came up for the 59th over holding skipper Ajinkya Rahane’s hopes against his back. After setting up a relatively quieter over, Yadav banged one short ball, tempting Paine to pull. A fielder placed at the square, the Australian keeper did keep the ball in front towards the mid-wicket, but Shaw made sure the ball didn’t fly past him.

Indian wicketkeeper Wriddhiman Saha and bowler Karthik Tyagi immediately came up to Shaw and later described the catch as simply, ‘Unbelievable’. Twitterati also took the moment to laud the Delhi Capitals batsman’s catch when many senior players, who are busy with the T20’s are having a tough time taking simple ones.

Only a day ago, Indian Virat Kohli was seen dropping a sitter catch which he afterwards converted into a run out to get rid of Matthew Wade. Hardik Pandya and Ravindra Jadeja have also been in the headlines because of dropped catches.

What Next For India A And Prithvi Shaw

Earlier, India A put up a decent batting show lead by skipper Ajinkya Rahane. The batsman’s unbeaten 117 and mainstay Cheteshwar Pujara’s half-century to put up a 247 run total. James Pattinson leads the Australian attack with three wickets followed by Micheal Neser and Travis Head. Both getting a couple of wickets each.

Prithvi Shaw, who opened for India A couldn’t open his account as Pattinson got the better off him. Tim Paine taking a comfortable catch. Shubman Gill, who opened with Shaw managed a one ball stay as he added a duck figure too.

Australia’s batting like India took early hits, with Will Pucovski (1) and Joe Burns (4) failing to read Umesh Yadav’s swing. However, after a breezy 35 run knock by Marcus Harris and a disappointing show by the skipper for the practice game Travis Head. It was Paine and young Green who carried the momentum taking the home team past India’s total. Australia will resume the day three at 286/8, hoping to add some pressure on Rahane’s men.