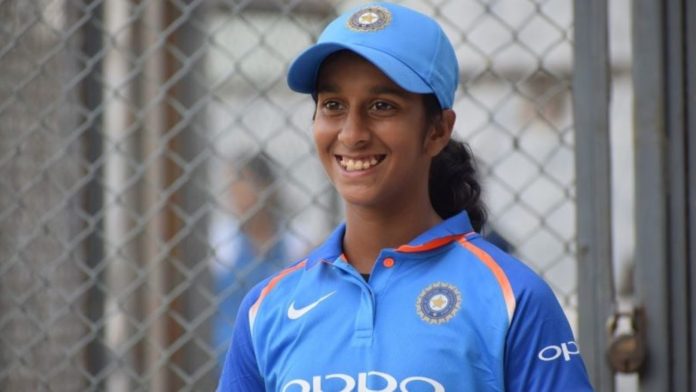 India’s Women team star batsman Jemimah Rodrigues is becoming one of the most popular players in the world. Moreover, she has surprised the whole world with her fearless batting approach. Jemimah has grown leaps and bounds, after earning a call up to the National team in Indian Women’s Tour of South Africa in February in 2018.

Jemimah earned the National Team call up on the back of a sensational season with the Mumbai U-19 team in 2017-18. She scored 1013 runs in that season. She also scored five hundred and a double century. Jemimah only went on to improve after that stupendous season. She also helped India to secure a place in the World T20 semifinals in 2018. Moreover, she finished the year as the sixth-ranked player in the ICC T20 rankings. However, she could not replicate that form in this year’s World T20.

ICC recently posted a picture of former England captain Kevin Pietersen and legendary spinner Shane Warne, using a phone to call. they captioned the post as “If you get a chance to call one cricketer on the phone, who would it be?”

Jemimah Rodrigues replies to ICC’s post in a hilarious manner

Jemimah decided to make the Twitterattis laugh with her reply. She replied to ICC’s post with a picture ‘Bhuvan’ from the Indian film Lagaan. Moreover, she also gave a funny caption which added to the humour. “Bhuvan from Lagaan, who single-handedly saved us from taxes,” she wrote in reply to the ICC’s tweet.

Bhuvan from Lagaan, who single handedly saved us from taxes ?? https://t.co/rORUEZyRn6 pic.twitter.com/X8e2D0ZNow

Some of the fans even decided to add to the humour using their replies. The Twitteratti always seems to find the funny side of things. They are known for their fun-loving nature, more often than not.

This is one such case as well. Below are the comments and responses that the fans had to her reply-

Hahah ! Who thought that @stevesmith49 would get inspired by Bhuvans backlift 🙂

Waiting for the Cricket to resume?

Jemimah was ready to play for his franchise Supernovas in the third season of the Women’s T20 Challenge. However, the coronavirus pandemic has halted all the sporting events in the world. The fans would be disappointed that no cricket is happening at the moment. It seems that there might be no more sporting activities, at least in the current year.

The fans will be hoping that cricket can resume soon. The IPL already was indefinitely suspended earlier this year. It further seems that the T20 World Cup might suffer the same fate as well. Keeping that in mind, the women will be hoping that they can leave their mark when the cricket resumes.

Jemimah Rodrigues is a hot prospect in the cricketing world. She will want to grow as a player and leave her mark on the game in various ways. With that being said, only time will tell whether she can do more or not. If yes, the fans could be in for something really special in the long-run. An interesting prospect to keep tabs on for sure.