NorthEast United have begun their campaign against Mumbai City FC with a win in the first match of the tournament. NEUFC have almost formed a new setup. The management has brought in new players and a new coach to change their fortune this season. So, it’s been a positive result for Northeast United at the beginning of the tournament.

On the other hand, Mumbai City FC has brought in many big names in their squad this season. They have also brought in Sergio Lobera as their head coach. Sergio Lobera has been quite successful as the coach of FC Goa in Indian Super League. It will be interesting to see whether he can replicate his success at the new franchise. Here are the talking points of the match:

Ahmed Jahouh has been brought to Mumbai City FC from FC Goa in this season. Jahouh is an important player in the set-up of Sergio Lobera. Ahmed Jahouh plays the role of a holding midfielder. He controls the whole game from the midfield. His challenge was not a good one but the straight red card was a bit harsh. The referee has been present at the spot and he has clearly seen the whole incident. At the 43rd minute of the game, they have been down with 10 men. So, the whole scenario of the game has changed from there.

It has not been a day for Mumbai City FC. The referee gave a penalty to Northeast United after the hardball of Rowlin Borges at the beginning of the second half. New striker of NorthEast United, Kwesi Appiah has made no mistake to put it into the goal at the 48th minute of the match. The game has become more difficult for Mumbai City FC after conceding the goal so early in the second half.

3. A Day To Forget For Mumbai City FC:

Mumbai City FC players will certainly like to forget the game and they have to focus on their next game from here on. They will have to play against FC Goa in the next match. After that, they will play against SC East Bengal who has come to the Indian Super League for the first time. SC East Bengal will be a surprise package for them and FC Goa have strengthened themselves after losing few players and their coach in this season. 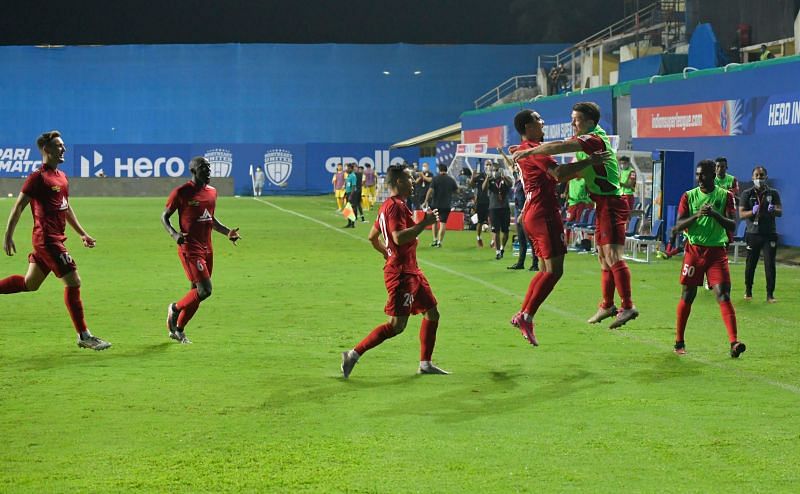 So, it will be a match between Sergio Lobera’s current team and former team. The players will certainly be excited about that match. Sergio Lobera is playing with a 4-2-3-1 formation. Ogbeche has been playing as the lone centre forward. They might have to think about a switch of formation in the next match as Ahmed Jahouh will not be available.

At the beginning of the match, NorthEast United have been trying to secure one point from this match. However, they have changed their approach after the red card. Camara has been brilliant for them throughout the whole match. NorthEast United have shown the potential to do well in this season from the very first match.