Kerala Blasters thrashed Hyderabad FC at home to keep their top four hope alive in this season’s Indian Super League. Kerala failed to win a single match after winning the opening match against ATK at Kochi. They were able to manage five draws and four losses in their last nine games. So, this win would certainly bring a sigh of relief in the camp of Kerala Blasters. 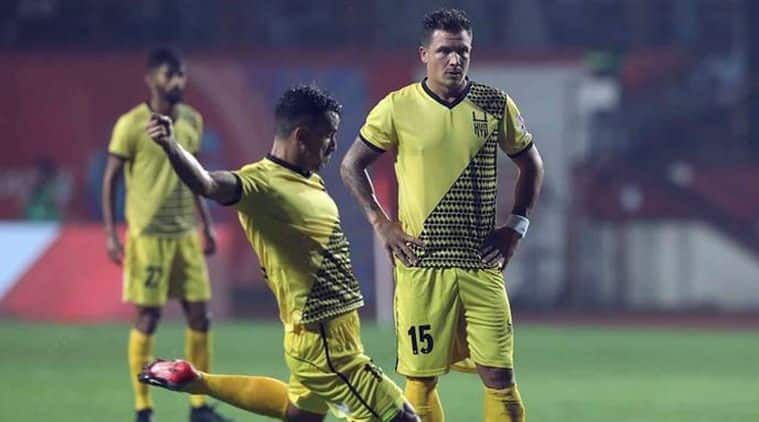 The match started off with a goal of Bobo. Marcelinho provided a brilliant ball towards Bobo and the centre forward did not make any mistake to put it into the Goal at the 14th minute of the match. Hyderabad FC got the lead and they started to feel that something would go in their way in this match. At the 29th minute of the match, Rafa picked up a knock and he was replaced by Glies Barnes. At the 33rd minute, Bartholomew Ogbeche scored the equaliser for Kerala Blasters. Gianni Zuiverloon provided the ball towards Bartholomew Ogbeche at time of this goal. Just six minutes later, Vlatko Drobarov scored another one for the home side. Seityasen Singh provided the assist in this goal.

Just at the stroke of the half time, Kerala Blasters took control of the match with another goal. Messi scored this time for Blasters with the pass provided by Holicharan Narzary. Messi was shown a yellow card for taking off his shirt during the celebration of the goal. The first half ended with a score-line of 3-1 in favour of Kerala Blasters at Jawaharlal Nehru Stadium in Kochi. Gianni Zuiverloon was booked at the 58th minute for a bad foul. Seityasen Singh scored the fourth goal for Kerala Blasters at the 59th minute of the match. Jessel Carneiro provided the pass during this goal. Abhishek Haldar was booked at the 62nd minute for a bad foul. Sahil Panwar was taken off the field and Gurtej Singh replaced him. Nestor Gordillo came in place of Marcelinho at the 71st minute of the match. It is very much strange why the head coach of Hyderabad FC, Phil Brown did not keep Nestor Gordillo in the starting lineup.

Bartholomew Ogbeche scored the fifth one for the home side at the 75th minute of the match. Messi provided the assist for this goal. Sahal Abdul Samad came in for Messi at the 81st minute. He was booked a few minutes later for time-wasting. There was no need of that; his team was leading by four goals. The young Indian players should learn how to act in various kind of match situations. Hyderabad FC never looked the better side in the field after the first half an hour. Kerala Blasters won the match by a margin of 5-1 at their home stadium.

Match Report: NorthEast United 2-2 FC Goa; One Of The Best...